In a recent article I described the use of the herb yarrow (Achillea millefolium) as first aide for a bleeding wound. In this article, I’ll share how I came to swear by yarrow for oral health care.

This story begins with me losing two teeth in about 2009 and 2010. At the urging of a (probably well-meaning) dentist, I had them both replaced with implants. After that experience, I started exploring natural oral care. I stopped using toothpaste when I learned that everything we expect of modern toothpastes is achieved using ingredients that are harmful to our teeth, our gums, and/or our oral biome.

I replaced toothpaste with very simple tooth-brushing ingredients, which I felt worked much better than toothpastes to keep my mouth healthy.

(I also learned a lot about the nutritional principles that could have enabled me to keep my teeth, but that’s a whole other story.)

My toothpaste boycott was interrupted by the birth of our second child and a big move from the US back to my home country of Australia, both of which happened in 2011.

And for the next few years, with young children keeping me busy and distracted, I went back to the convenience of toothpastes in tubes labelled “natural” from the nearest health food store.

Then in 2017, the gum tissue around the first of my two tooth implants started receding, apparently unstoppably.

At the time, I had kind of forgotten what I previously learned about toothpastes and natural oral care. It didn’t occur to me to look at what I was putting on my toothbrush every day that might be affecting my gum health. I just went along to a dentist and asked his advice.

The dentist said that he didn’t see how the gum tissue could be returned to health, and that if the recession continued the jaw bone would begin to disintegrate too. The best thing would be to have the implant removed.

Yarrow to the rescue

After having the first implant painfully removed, I felt motivated to take up my oral health care crusade again.

I stopped using toothpastes for the second time (it was much harder this time because now I had children who were accustomed to the sweet, smooth stuff in the tubes), and was again using simple ingredients to brush with.

Toothpastes, even the “natural” ones, contain a lot of ingredients that are counterproductive to gum health and general oral well-being, and I think that eliminating them was a step in the right direction.

But apparently it wasn’t enough, because then the gum tissue around the second implant began to deteriorate in the same way the first one had.

My first reaction was, “Oh no, I’m going to have to have this one painfully and expensively gouged out, like I had to with the first one.”

But then I remembered something else that might help: yarrow tincture1.

When I started adding yarrow tincture to my rinsing water after brushing, as if by magic, the tender, painful area around the base of the implant stopped being tender and painful. The gum tissue stopped receding. The issue just went away, and now, almost three years later, it hasn’t come back.

(In case you’re unfamiliar with what a herbal tincture is I’ll explain in a minute, but first I want to share a bit about yarrow.) Yarrow has an extraordinary range of medicinal uses.

Most of the literature I’ve found on using yarrow medicinally describes its uses in reducing fevers, treating colds and flus, for digestive support, for wound first aide and ongoing care, for cardiovascular support and circulatory health, urinary support, post-partum and menstrual support, and skin conditions.

Pretty impressive, right? But that list is only a beginning – if you really go searching for more, you’ll find that the list of yarrow’s possible uses can get really, really long. And somewhere in the bottom third or so of the longest lists there are references to its use for toothaches and periodontal (gum) disease.

Yarrow is anti-inflammatory, antiseptic/anti-microbial, and astringent (causes tightening of body tissues). It is both styptic (stops bleeding), and also has the ability to support healthy blood circulation. All of these make it extremely helpful in preventing and healing gum disease.

Yarrow is easy to find and grow almost anywhere in the world. Making yarrow tea is as simple as pouring boiling water onto the fresh or dried herb, and making a yarrow tincture at home is also super easy2. 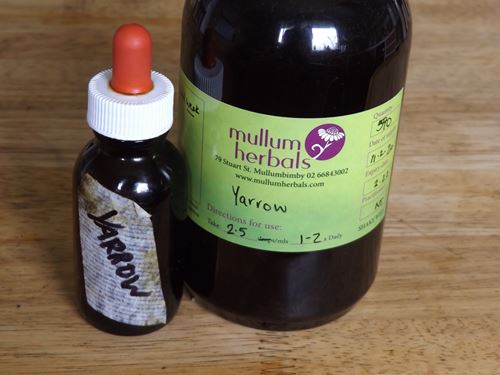 Tinctures are herbal preparations that use a solvent (usually alcohol, but sometimes vinegar or glycerin) to extract medicinal properties from a plant and preserve them in liquid form. Alcohol extracts a wide range of plant constituents and allows for easy absorption of healing compounds into the bloodstream when the medicine is taken internally.

Tinctures that use the aerial (above ground) parts of the plant, yarrow included, are more potent if made from fresh herbs rather than dried.

Tinctures can be used externally as well as internally. Yarrow tincture for example can be sprayed on the skin to repel insects3; sprayed on a wound to stop bleeding4, protect against infection, and promote healing; or added to the water when we rinse our mouths to protect against unfriendly bacteria, support healthy circulation, and tighten and tone the gum tissue.

In this article, Wise Woman Herbalist Susun Weed describes yarrow as an easy-to-find-or-grow antibacterial and astringent herb with a long history of use in oral health. In this one, she says she has sprayed yarrow tincture into her throat to short-circuit a sore throat, and has used it on a tooth that throbbed for instant pain relief.

This article by TheHerbalAcademy.com lists yarrow for toothache, and this one from MotherEarthLiving.com (scroll to the bottom) says it’s helpful in promoting healing of mouth sores due to braces, surgery and overzealous teeth cleaning.

This article by SolidarityApothecary.org shares that yarrow tea swished around in your mouth will have an antimicrobial action, stop bleeding, and prevent infection.

In his book Medicinal Plants of the Mountain West, Herbalist Michael Moore describes the use of yarrow to relieve a toothache.

Finally, I always like it when science arrives at agreement with older healing modalities. This study concluded that yarrow was more helpful in healing the debilitating side-effect of chemotherapy on gum health than the conventional treatment.