Backyard Chickens, and the Interconnectedness of All Things – Part 3

​Backyard Chickens & the interconnectedness of ​everything - Part 3 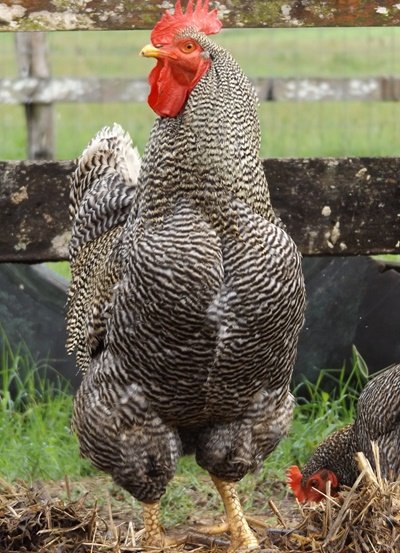 This article shares the funny antics of one of our roosters, whose stories include such things as nesting boxes, ​interested hens, and a falling wheelbarrow.

It concludes on a more serious note, with the question,

"Can good husbandry, regenerative agriculture, and morally right living, be defined in terms of happiness and connection?"

If you are interested only in ​rooster adventures, this article will be fine to read by itself.

But if you missed the earlier articles in the series, and you’re interested in what backyard chickens have to do with the interconnectedness of all things, you’ll need to go back to the beginning of Part 1. Part 2, if you need it, is here.

Backyard chickens, and the interconnectedness of all things. Part 3

​Roosters are a lot of fun to watch

Roosters are gentle, generous, and protective, particularly as they get older, feel they have their place well established, and don’t have to compete with other roosters for space or mates.

They show the hens all the good things to eat that they find, calling them and sharing the food in a similar way to how a mother hen shares with her chicks. And they come running to defend the hens when they hear one in distress.

In our flock of about 30 hens, there are currently three adult roosters. The oldest has his own family group of hens who go with him to forage in the same areas each day, to rest in the same shady spots, to dust bath in their designated dust baths.

The other two are younger, and very different. One, a large white rooster who stars in the stories I’ll share below, seems to be where-ever there is food to share with hens, or where-ever there are good spots for hens to lay eggs.

The third rooster is the youngest, and still acts a bit like a thug. His manners will improve, if my experience with other roosters in the past is anything to go by, as he matures.

Until recently I thought that sharing food, keeping their own little flock of hens together, and defending them from predators and from other roosters was about it for adult rooster behavior. Then I saw our white rooster, apparently, showing a hen where to lay her egg.

A rooster who takes an interest in egg laying

The first time I noticed this, the rooster was clucking to a hen with something similar to a “come, share my food,” kind of cluck.

Similar, but not the same – this was slower and less excited. More appropriate for egg laying than for catching food. He was standing in a hollow against a wall amongst a pile of hay – a likely looking egg-laying spot.

​The rooster stepped out of the hollow, and stood aside while the hen stepped into it.  She sat down, turned around experimentally. He moved away a bit further.

But then she must have decided she knew better, because she got up and moved a very small distance along the wall and settled down there.

A short time later the hen and the rooster were gone, and there was a fresh egg lying there. (I took it quickly, before the local crow could take it.)

The next time I saw this rooster do his sit-down, stand-up, lay-your-egg-here routine, he was behind a nesting box (perhaps he would have suggested the nesting box itself, only he couldn’t fit into it). That time, I was on my way to chill the milk in my billy and didn’t hang about to see the outcome.

After that, I started paying a lot more attention to him, and I’ve come to realize that, for him at least if not for all roosters, this is normal behavior. 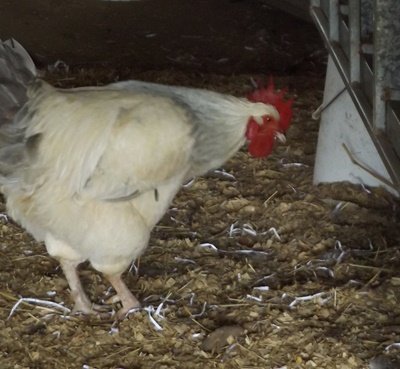 ​​Talking to a hen in a nesting box.

He regularly “talks” to the hens about the nesting boxes. Once when a hen was already in a box, he stood outside, clucking to her.

​Another time I saw him walking slowly up and down in front of the boxes, going underneath, coming out, going under again, talking to a grey hen about it the whole time. This grey hen didn’t look very interested, but on all the other occasions, the hens I’ve seen him “talking to” have appeared to be listening intently.

I’ve even seen him squeeze himself, with considerable effort, in behind the row of nesting boxes, and somehow squish himself all the way along behind them and out the other end – closely followed by a hen. I was so curious, I went closer to see what would happen next. Sadly, I scared the hen away, and whatever might have happened next, did not.

Another episode was very entertaining. The rooster had jumped up into a wheelbarrow full of hay. A large black hen stood watching from the ground as he clucked and sat, clucked and stood, clucked and sat… then he stood aside for her to come up and see the little hollow in the hay that he had been indicating.

Unfortunately, when he stood aside he stood on the edge of the wheelbarrow and it fell over. (He’s quite a large, heavy rooster.)

The rooster and the wheelbarrow fell on the hen, who squeezed herself out from under and ran away, squawking in alarm. He didn’t make a very good impression, that day.

On yet another occasion, while I was milking, I saw this rooster sit down against a wall near a ​water dispenser. He clucked to the hens and pointed with his beak to the wall behind the waterer. Four hens came quickly to see what he was on about. He clucked and pointed to the wall, they watched and listened intently…

And then Lulu the cow lifted up her hind leg to scratch behind her ear, and I had to stand up quickly to rescue my stool and milk billy. When I looked back, hens and rooster had all lost interest—possibly due to our bit of a kerfuffle next door—and the moment had passed.

Did the rooster see insects crawling on the wall that he was suggesting the hens could eat? If so, why was he sitting down while pointing at the wall?

On other occasions when I’ve seen him apparently talking to hens about where to lay eggs, it’s been one hen at a time. This time he had four hens watching him. I didn’t see them make any effort to catch insects. What else could he have been talking to them about?

I don’t know, but I do wish Lulu hadn’t had an itchy ear just then.

Can good husbandry, regenerative agriculture, and morally right living, be defined in terms of happiness and connection?

​​​If someone loves mother hens and little chicks, or whales, or any other living thing, then they will act in the best interests of our living planet.

Conversely, without love, no amount of action will suffice.

In his book, “The Small-Scale Poultry Flock,” Harvey Ussery states that eating is “an intensely moral act.”

Agriculture that is sustainable and regenerative, will also stand up to moral scrutiny.

Ussery also says it another way: the happiness of his birds "defines good husbandry."

To some, it might seem illogical to lump good husbandry, sustainable and regenerative agriculture, and morally right living all together, and to define them in terms of happiness and connection.

What on earth could the happiness of a mother hen with her chicks, or a rooster with his flock, have to do with staving off the multiple crises we face, and healing all that needs healing?

Well, what else is there, besides happiness and connection—love—that might work?

Technology is failing us. The wars against germs, against poverty, against drought, against drugs, against traffickers of children and women, against terrorists, against poachers – at best all these wars are not succeeding as quickly as we need them to; at worst they are bringing only more war.

Everything we’ve tried to rely on until now—all material wealth and security, the best that science and technology or power and control could offer us—all can be washed away in a flood, burned in a fire, or vaporized in economic collapse or political turmoil.

When that happens, what remains?

Only whatever happiness, love, and connection we can summon up from within ourselves, and from within our relationships with each other and our living world, will remain.

I leave you with this quote.

"​Love is the expansion of self to include another, whose well-being becomes part of one's own. The healing of our planet will not come without love for our planet.

It … won’t come from technological solutions that seek to more competently deploy resources and manage consequences. That is the path toward bio-fuel plantations, nuclear power plants, and geoengineering schemes that threaten catastrophic consequences.

If someone loves the rhinos, … the mangroves, … the coral reefs, … the rain forests threatened by strip mines and the waters threatened by oil spills, [if ​they love mother hens and little chicks, or whales, or any other living thing – then they will act in the best interests of our living planet, whatever form those actions need to take].

Conversely, without love behind it, no [amount of action] will make a difference in the long run."

Charles Eisenstein, “In a Rhino, Everything.”