7 Steps to a Frog Pond that Also Grows Food 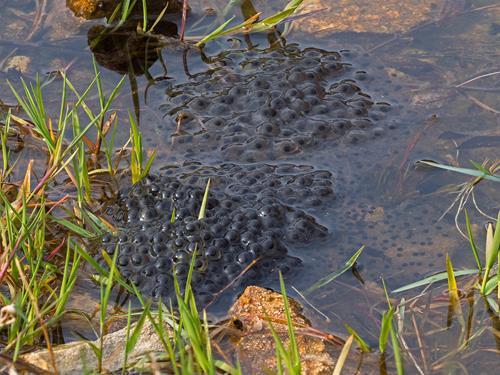 7 Steps to a Frog Pond that Also Grows Food

This post is all about how we built a pond for tadpoles and frogs that will also grow food-producing water plants and edge plants. It's our first attempt, so it's very small. If it works, we'll make more, or make this one bigger. Or both.

I’ve been wanting to establish a “wetland” area to grow food-producing water plants.

And recently, our children filled our porch for months with tubs of frog eggs gathered carefully from livestock water troughs and a disused dip, and carried home to hatch. When the tadpoles turn into frogs, the children equally carefully returned them to the area they got the eggs from.

We came up with an idea that might meet both these needs—space for water loving plants and space for tadpoles—at once. We called the idea “the tadpole pond.”

It took a long time to get started on, between other projects, and it’s not completely finished yet.  But it’s far enough along that I thought I could share the idea with you, and maybe by writing about it I’ll generate the necessary momentum to get it finished.

The idea consists of a pond with some sort of pond-liner to hold the water (we used an IBC; more on those below), and a moist area beside it (or in our case, a moist area on both sides — see drawings below). The pond overflows into the moist area/s.

The pond will be home to tadpoles, obviously, and small fish to eat the mosquito larvae (there are varieties of fish that eat mosquito larvae but do not eat tiny tadpoles).

Besides the tadpoles, we'll experiment with aquatic food-producing, frog-friendly plants in the water, which I'll talk more about later in this post. The moist soil on either side of the pond will suit edge plants like taro and water chestnuts, which I'll also cover later.

In this first project, the wetland areas will be so tiny that they don’t really deserve the name “wetlands.” But I hope this experiment will lead to something larger.

Here’s some artwork so you can see the concept, looking at it from side on. 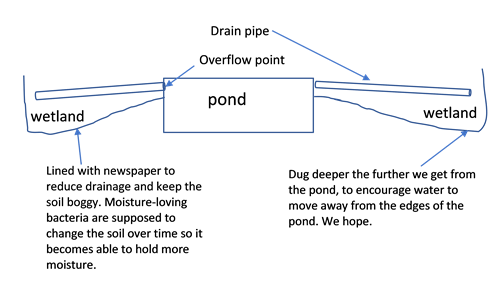 And here's a bird's eye view:

These are the approximate steps we took for our tadpole pond:

So now you have the basic concept. The rest of this post shares pics of the steps we've taken so far and ends with some resource lists on water plants and frogs.

Marking it out and digging

We planned to use a cut off IBC (an Intermediate bulk container, also known as a Bulky, IBC tank, IBC tote, or pallet tank, pictured below) for our pond liner. 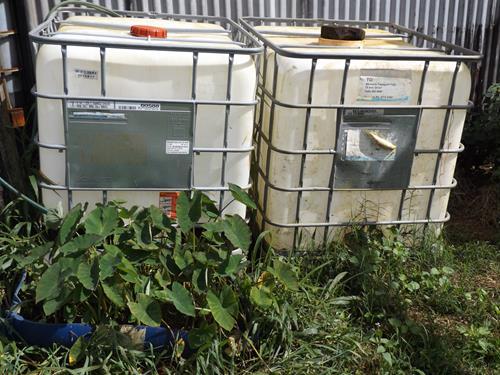 IBCs are often available for quite cheap after they’ve been used once – with years and years of life left in them.

(In the foreground in the picture above is a tub-full of taro, a water-loving food plant featured further down in this post. That poor taro has been surviving in that tub since our move here about 6 years ago. Now, finally, it will have a better place to live.)

An IBC is 100 by 100cm, so that was the size of the hole we dug for the pond. In the image below, you can see four pegs (two orange ones in the foreground and two white ones in the background) that marked the outer corners of the wetland areas. The square in the middle, where digging has commenced, is where the pond will be. 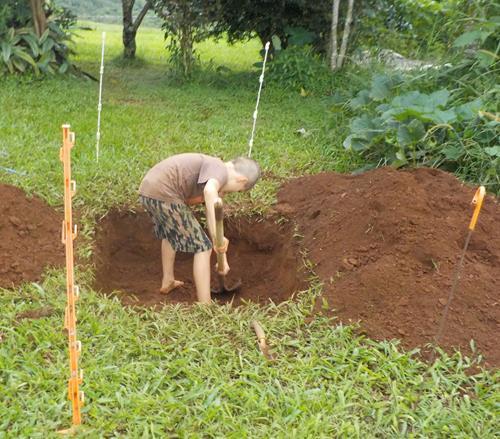 In this pic (taken from the other direction), you can see the upturned cut off IBC that we will be using as the pond liner. 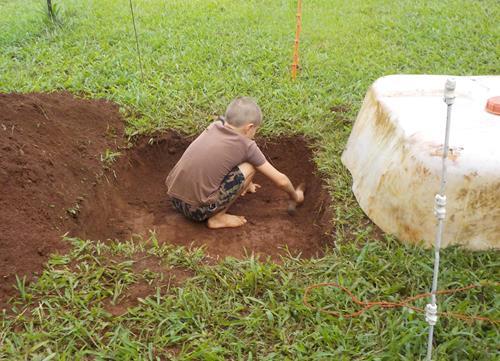 Now, the pond liner is in place. 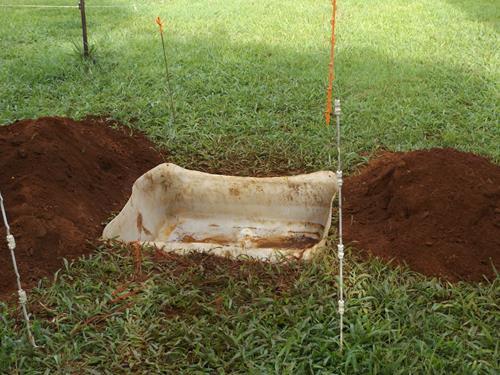 And now there’s water. We thought that filling the tub might hold it in place better while we dug out the wetland areas on either side of it. At this stage we were planning to keep the two piles of soil on either side as dry, mounded areas to walk on. 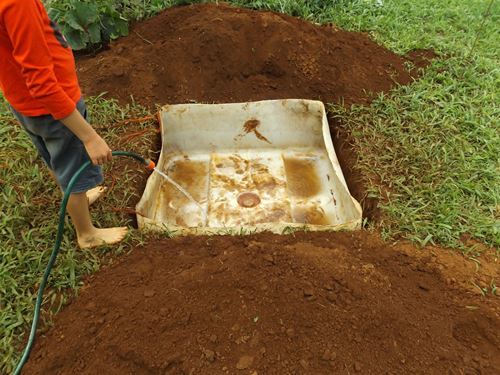 The wetland areas either side of the pond

In the pics below: starting to dig out the wetland areas either side of the pond. 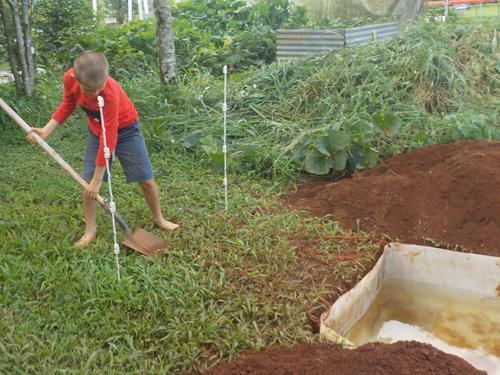 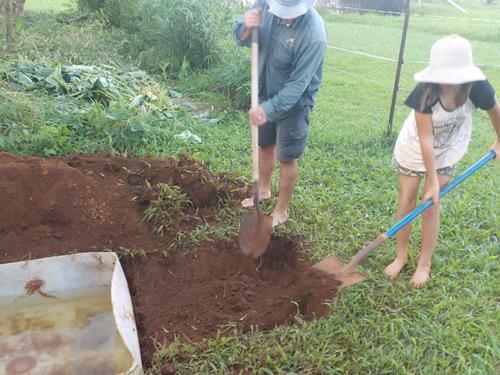 One side nearly all dug out. 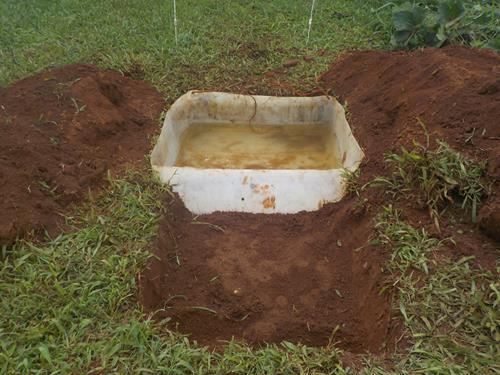 Drainage from the pond to the wetland areas

The pipes we used for drainage were just bits of pipe we found in our pile of pipe bits, selected because Alain happened to have a drilling thingy that would make a hole that that bit of pipe could be shoved into. (Yes, you are correct: I'm the ideas person, not the tool wielding person.)

In the pic below you can see both ends of the drainage pipe. We had placed the pipe and then re-filled the pit after lining it with newspaper. You can see we left an unfilled area at the end of the pipe, where the newspaper is sagging over. 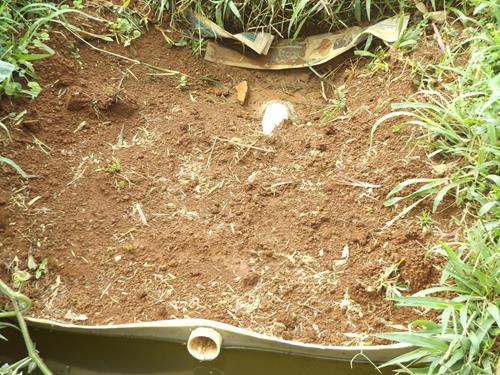 Then we had the idea of putting a pile of stones around the end of the pipe in hopes that it would prevent the pipe from becoming blocked with soil. If we did it again, I think we would put the stones in place before the soil. 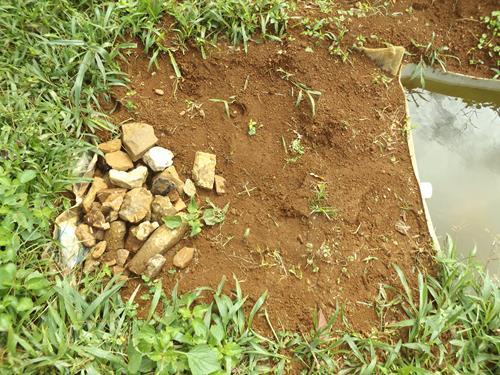 So that's the pond built. In the sections below, I'll list the plants we're using or planning to use in and beside our tadpole pond. And finally, I'll list some frog resources as well.

Starting with taro and azolla

Below is the first (so far, the only) thing planted beside our tadpole pond – taro. These have not been there very long and they’re already looking happier than they were in that blue barrel beside the IBCs.

Also in the image below you can see azolla floating on the pond surface. Azolla is a water fern that floats on the surface, hosting nitrogen-fixing bacteria. It serves as high-protein food for our chickens and can also be fed to other types of livestock, too. 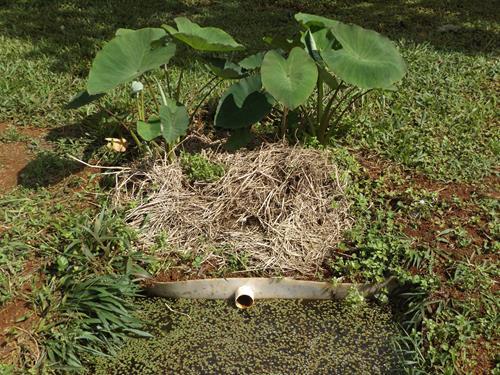 Taro tuber is an important staple food throughout much of the pacific and can be used in a multitude of ways. The pics below are from the internet; before too long, I hope, I’ll have pictures of our own tubers to add to this post. 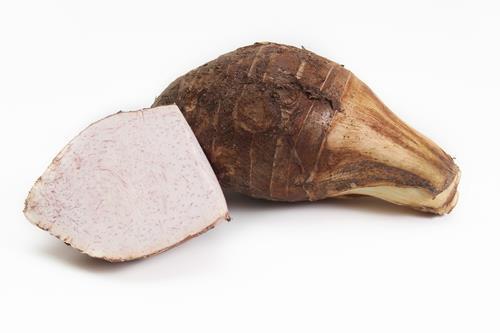 The part of taro that you eat: the tuber at the base of the plant 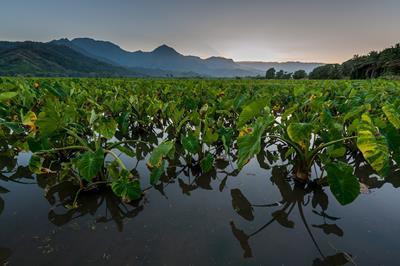 Two more plants I have that I'm planning to add to this project are kangkong and water chestnuts.

Kangkong is also called water spinach, swamp cabbage, or river spinach (Ipomoea aquatica). It's a Thai vegetable that needs moist soil, can tolerate being submerged, and will send runners out over the surface of the water. Its young leaves, stems and tips are lightly steamed or added at the last minute to stir-fries. I also put it in salads. The image below is of kangkong being harvested in the Philippines. 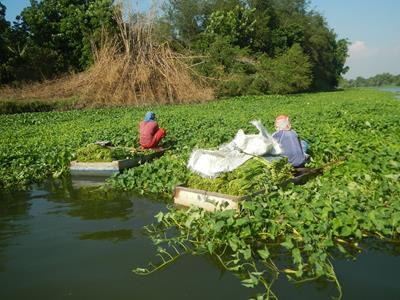 Water chestnut (Eleocharis dulcis) is a rush-like plant growing up to 1m tall, native to swampy, tropical areas of Asia. There is also a small variety native to the tropical wetlands of Australia. Water chestnuts are used in Chinese, Japanese and Indonesian stir-fry dishes and soups. I don't have a pic, but you can find more info and pics of water chestnuts here.

Two plants I don't have yet but I'm keen to get are duck potato and pickerel rush.

The name duck potato to me is irresistible: it suggests a potato that can be found underwater at about the depth a duck would forage. Its also called Arrowhead, Kuwai, Chi gu, and Swamp potato; its scientific name is agittaria sagittifolia or Sagittaria sinensis.

It's described as a hardy water-plant with attractive arrow-shaped leaves, that produces a small, edible tuber. Suitable for temperate and subtropical areas.

The other plant I've very interested in trying is called  Pickerel Rush (Pontederia cordata). I'm interested in this one both for its edible seeds and leaf stalks, and also because it is described as providing nectar for bees and butterflies and habitat for frogs.

This page lists all the above plants and a number of other edible tropical and subtropical water plants and edge plants. It also gives lots of useful information on how to set up your pond and its plants for success.

Frog and tadpole websites for Australia

Finally, I thought I'd finish off by sharing some frog resources for Australian readers.

How do I take care of tadpoles?

Do you grow edible water plants? Have you set up ponds or water features to support your local frogs and other small wildlife? Please share...