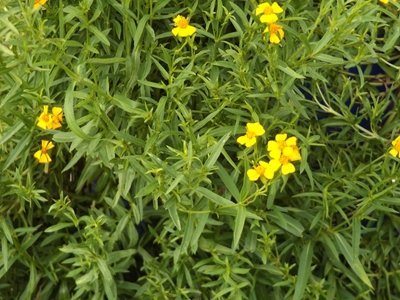 It took me a while to begin to appreciate the sheer beauty of the Mexican tarragon in my garden. Then I learned almost by accident what a delicious iced tea it makes, and from there I discovered its huge array of potential uses in the kitchen, the medicine cabinet, and the garden.

I’m so glad I started learning more about Mexican tarragon. Here’s what I’ve discovered so far.

Many names – and other “tarragons”

Mexican tarragon (Tagetes lucid), is a perennial culinary herb native to Central and South America. It’s in the family Asteraceae, which is also sometimes referred to as Compositae.

Lucid in the scientific name of this plant comes from lucida, from the Latin adjective lūcidus which means “bright, shining,” and that’s a very fitting name for this beautiful plant. When it’s in flower, on a sunny day the whole plant seems to glow.

It has a long string of common names besides Mexican tarragon, which include but are not limited to: sweet mace, winter tarragon, cloud plant, sweet or sweet-scented marigold, Santa maria, African marigold, Mexican or Mexican-mint marigold, Texas tarragon.

(Common names can be misleading; always be sure about the scientific name--the fancy two-word name in brackets and/or italics after the common name--of any plant you intend to ingest or use for medicine!)

Mexican tarragon produces woody stems that, once taller than about 70cm, will sprawl across the ground and will root along the length of the stem where it touches the ground.

The leaves are narrow, medium green, and when bruised have a distinct aniseed scent and flavor which I find delicious, but which may be off-putting if you’re not an aniseed fan.

It produces clusters of gorgeous bright golden yellow flowers throughout the warmer months. 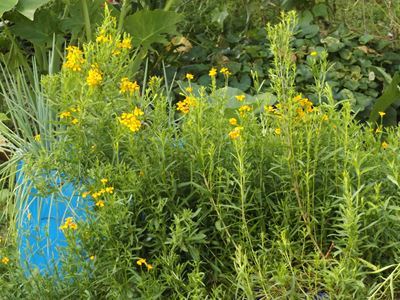 Mexican tarragon needs partial to full sun, good drainage, and can grow in soils from mildly acid to mildly alkaline. It likes lots of organic matter, but since it originates in dry, rocky conditions, I expect it would be tolerant of neglect and poor soils.

You can propagate Mexican tarragon by division, from cuttings, or best of all by cutting off a long woody stem that has rooted along its length and transplanting that to the new position.

It does produce a viable seed which you can buy online (make sure you check the scientific name!) but if you have access to the plant, division or stem cuttings are super easy and would be much faster.

It thrives in heat and may die back in colder weather. If you get frosts where you live I’d suggest taking some inside for the winter. But I’d bet that if it were well mulched and protected, it would come back after mild frost.

My recent interest in Mexican tarragon came about when I added a few fresh leaves experimentally to ginger tea, sweetened with stevia, which we then chilled and drank cold. It was delicious. 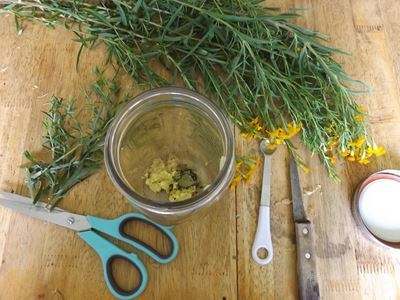 (Amounts are very approximate; adjust as you like. If your people don't like ginger or don't like tarragon, either ingredient can be omitted. If you omit the ginger, you may not need the stevia.)

Let that sit ‘till its cool, then add cold water to make about 2 liters and enjoy. Very refreshing in hot weather.

So far, the only other culinary use I’ve put tarragon to was when I froze some fresh leaves and then added that to morning pancakes recently. The freezing made it mushy and spreadable, and released the flavor. With yogurt and a squeeze of honey on a pancake: yum.

If you’re into French cuisine, according to the recipes on the internet, Mexican tarragon can be used sparingly as a substitute for French tarragon in any recipe (use less; the flavor is stronger).

It would make a great herb vinegar: loosely pack a glass jar or bottle with chopped fresh leaves and cover with vinegar. Leave for 6 weeks and then use with or without straining out the plant material. Use a non-metal lid, or put a piece of waxed paper between lid and vinegar. (Herbal vinegars made this way, with lots of plant material and a long extraction time, are not just condiments. They are nutritive and safely medicinal; read more here.)

You could also add the leaves, chopped fresh or frozen, to salads, fruit salads, or deserts.

(Freezing breaks the rigid plant cell wall so your people won't have to chew to get the flavor and aroma; it also makes the nutrition in the plant cells much more readily available to our digestive systems.)

The list of medicinal and also shamanic uses I found online for Mexican tarragon is long and varied. I found mention of its use for things as diverse as:

It’s a herb that’s been around for a long time and has deep cultural significance in its native areas.

Since I don’t know anything about any of these uses or have any experience with them, rather than try to be specific in this section I decided just to share a few references I found, and to encourage you to do your own research if any of this interests you.

Entheology.com: Preserving Shamanism’s Ancient Sacred Knowledge. (“Entheology” is from “entheogen,” which in this context is a plant that can help produce transcendent experiences and facilitate spiritual development; and “theology,” the study of religious faith, practice, and experience, or the study of God.)

Like other members of the marigold genus (indicated by the genus name “Tagetes” in the scientific name), Mexican tarragon is a useful companion plant in the garden. Secretions from its roots may help repel nematodes and may also have an effect against some persistent weeds such as couch grass. The growing plant also has a repellent effect on various insect pests.

The flowers have been used to make a yellow die.

And finally, the dried plant can be burnt as an incense and to repel insects.

I don’t remember how we came to have Mexican tarragon in our garden. In my memory it just seems to have showed up. It hung around for a while in an out of the way spot, gradually expanding itself until I put it in a container to stop its spread.

Luckily I put it near a path where I'd notice it as I went past every day. Now I'm looking for other spots to add it to in the garden; it has become a favorite.

In another post soon, I'll write about why actually I wonder if it was luck that had me put it near a path where I'd get to know it better... or something other than luck.

Meantime, I hope this has been useful. Thanks so much for reading!

References not mentioned in the text

Plants For a Future

Advice From the Herb Lady

Do you have Mexican tarragon in your garden? Use it in the kitchen or medicine cabinet? Please tell us about it 🙂