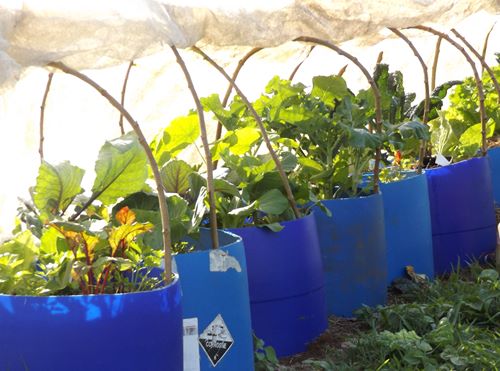 Make a Frame for a Veggie Net Using Mulberry Branches

Recently we've begun experimenting with bandicoot-proofing our annual veggies by planting them in "raised beds" made from rows of cut off barrels. In this post, I'll describe how we went about caterpillar-proofing them.

We had sections of an old veggie net ready to re-use, and we needed something to hold it up off our veggies. (Yes, you can lay this kind of light veggie net over your beds and the plants will push it up as they grow. But we didn't want to do this because we get extended wet periods, so we want as much air flow as possible around our plants.)

For our framework we wanted to use something readily available, inexpensive, and bio-degradable at the end of its lifetime.

Mulberry branches to the rescue

Mulberries ... sometimes they look messy and scraggly, with their long, long thin branches. Especially in winter when there aren't many leaves on them. And they send individual branches straight toward the sky, rather than staying compactly down in easy berry-picking reach.

So, we pruned off some of those messy, long, thin, flexible branches. 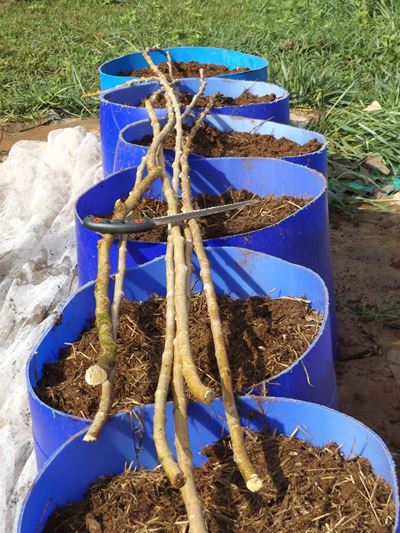 We discovered that you could bend them by standing on the thick end... 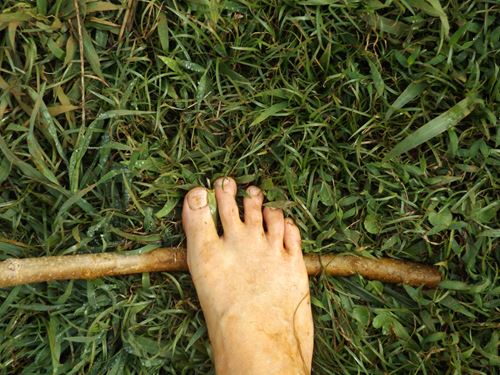 then you could "walk" up the branch, holding the other end in the air and bending it, where your foot is holding it to the ground, as you go... 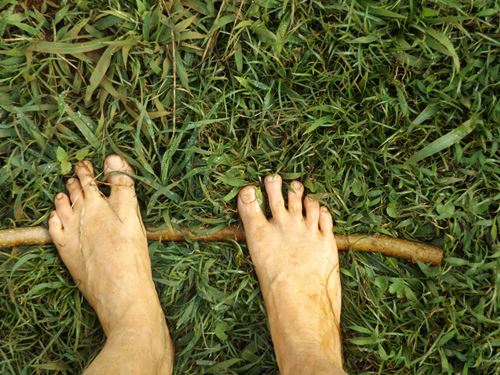 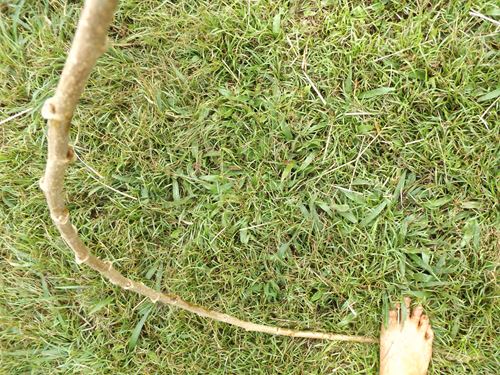 ... until it begins to hold its bend. (It didn't hold the bend in the pic below for very long; it gradually straightened out again.) 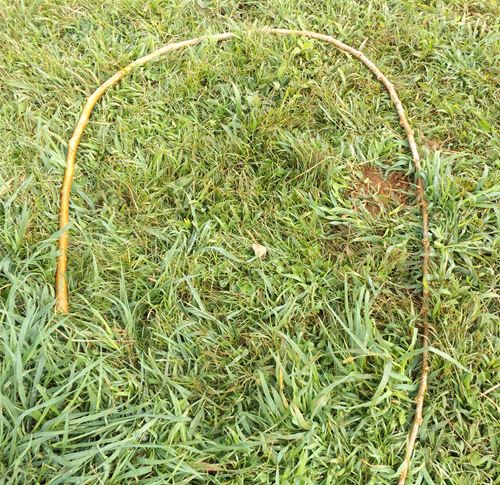 Once it's nicely bent, you can stick the thick end down one side of your barrel, and... 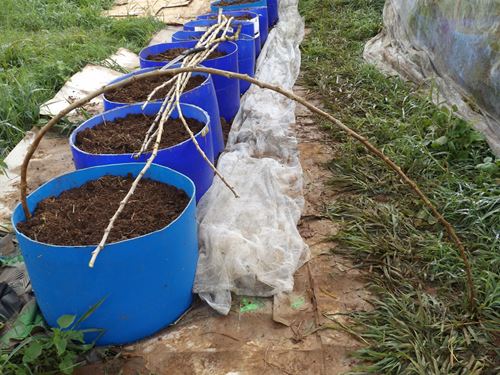 ... trim off the thin end to the length you need, and stick that in the other side. 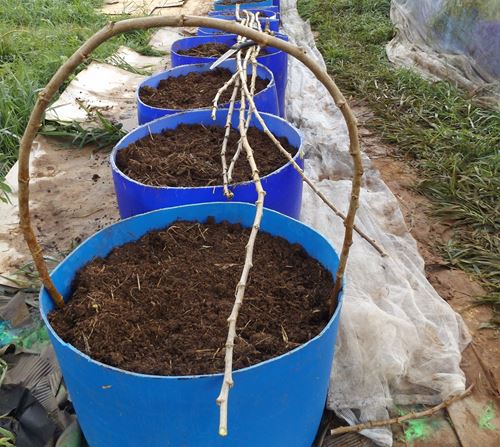 Now all you have to do is repeat the process... 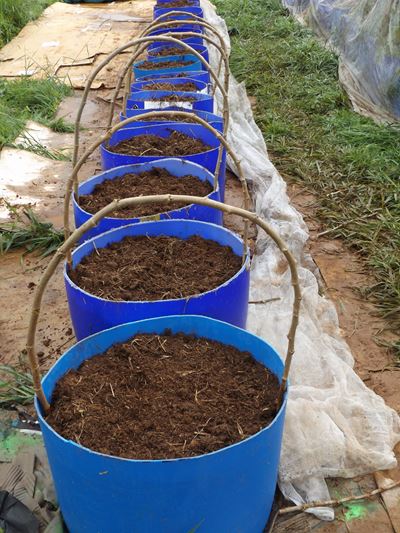 Placing a wire above the row

We also decided to place a picket at either end of the row (driven in on an angle, with its top further away and its base closer, see pic below) and use the pickets to suspend a wire above the row. 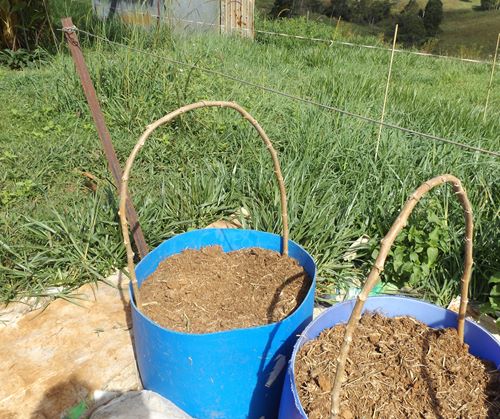 In the next image you can see the wire, indicated by the two red clothes pegs. 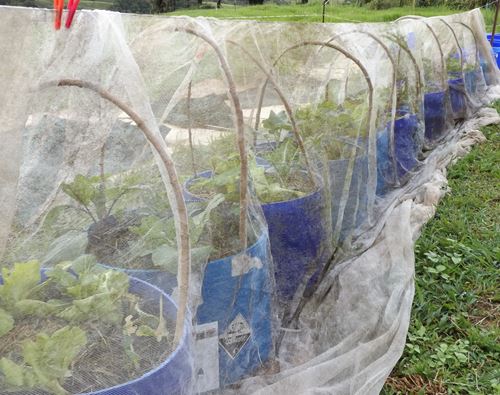 Cast off bits of shade-cloth

We wanted the wire there that so we could use clothes pegs to attach bits and pieces of shade cloth, as needed. (See the next image down.)

In our climate we can get weeks of drizzly, grey weather, and then three days in a row of relatively harsh, bright sunshine. The transition causes our European veggies to wilt dramatically, and insect attacks are much more likely after a stressful episode like that.

So, we have become collectors of other folks' bits and pieces of cast off shade cloth. We favor smaller cast off bits over big, shiny, new swaths of shade cloth because A, they're free or very cheap, B, it keeps them out of landfill, and C, one person can easily use small pieces to cover specific areas of the garden rather than it being a two person job to heft a great big piece over a large area (and make sure it stays put). 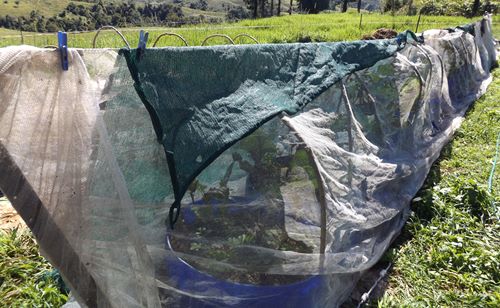 So finally, with our drums filled, our mulberry branch framework in place, and our wire suspended above for shade-cloth fixing purposes, all we have to do now is mulch (which I forgot to get a picture of) and plant. Or, as in the image below, plant and then mulch. 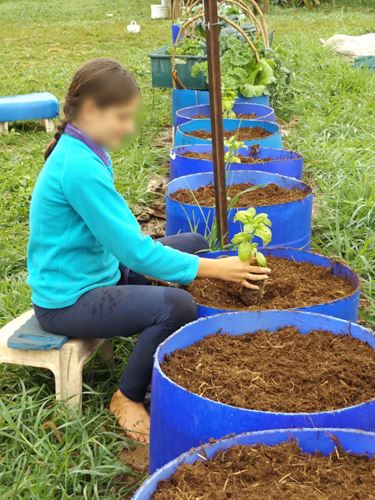 Optimistic about our new set-up

It's very early days yet, but so far I'm excited about our new set-up for annual veggies. We've already harvested quite a lot of food, with lots more to come before the hot weather returns and sends me back to trying to figure out how to get my family to eat tropical perennials.

Our annual veggie gardening in the past has always felt a bit precarious -- like we could have veggies till the next wave of caterpillars or the next all-night bandicoot party or until I failed to adequately keep up with taking care of them.

I'll let you know how it evolves. Meantime, thanks for reading!

Have you done anything similar? Have any ideas to share on what other plants would yield similar long, flexible branches at your place?