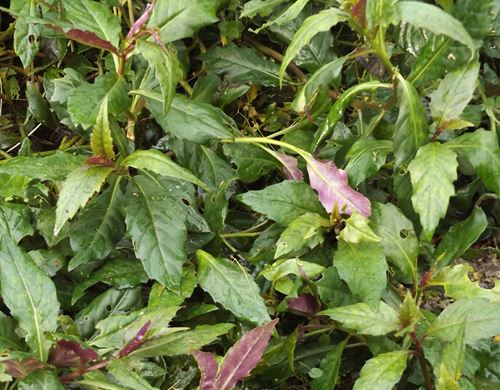 About a 4-minute read, tips on growing and eating, lots of pics

Okinawa spinach is not a spinach at all, but a perennial leafy green.

The tops of the leaves are dark green with a striking purple underside. With frequent pruning (harvesting) it forms a handsome, dense, non-vining ground-cover.

You could landscape your front yard or your sidewalk with this plant and no-one need know, unless you tell them, that it’s edible and nutritious. The best part is that the more you eat it, the better it looks.

In tropical climates it requires little, if any, maintenance other than pruning (harvesting) and will produce abundant greens year-round, for years on end. 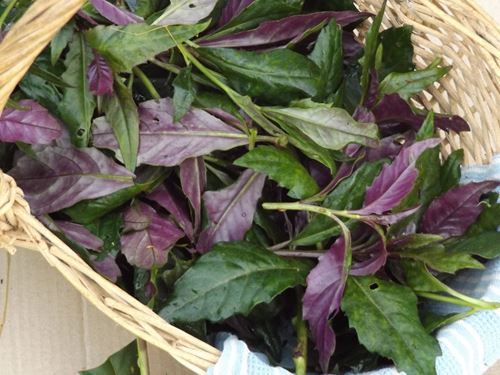 So long as it has adequate warmth and moisture, I find it to be one of the easiest, low-maintenance, perennial, leafy green vegetables to grow, in full sun or partial shade.  It seems to be relatively pest-free, and so vigorous that what little pest damage it does suffer is inconsequential.

In subtropical climates, okinawa spinach will be slower growing, and in climates that get frost you could pot it up and bring it inside for the winter, then move it outside again after the frosts are over.

It grows well in containers, hanging baskets, or even on a windowsill so long as there is enough light.

If you’re using okinawa spinach as a food plant you’re probably cutting off most of the long flowering stalks to encourage more leaf production, but it’s worth keeping a few flowers just for their little flash of orange amongst the green and purple. I cut these flowers off before thinking that you might have wanted to see how they look… 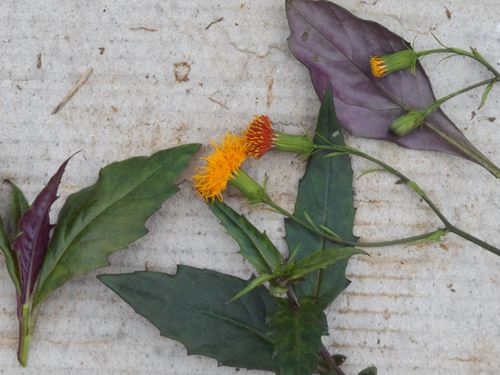 Okinawa spinach is easy to propagate with cuttings rooted in water or just laid into moist soil.  Remove most of the leaves, leaving just a few small healthy ones, then bury the stem with the leaves poking out.  Keep moist.

(Removing most of the leaves reduces stress on the cutting by reducing transpiration—moisture loss—from the leaves.) 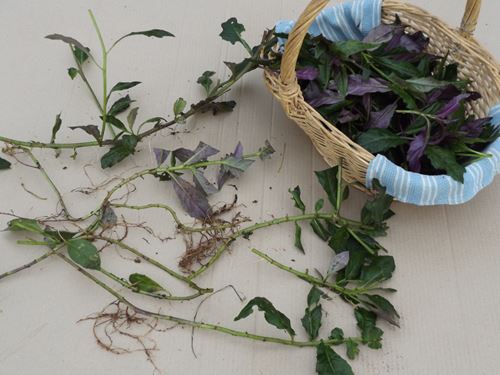 The easiest way to propagate okinawa spinach is as you see in the image above: harvest some long runners from an established patch. Cut off the tips and put them in a basket for the kitchen, remove most of the leaves from some of the runners that already have roots, and replant them somewhere else.

The trusty internet describes okinawa spinach as a nutritious vegetable which can be eaten raw or cooked. 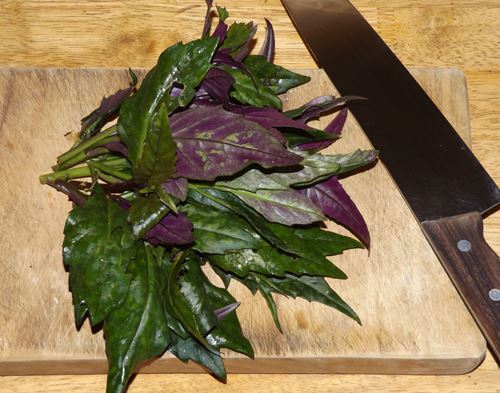 (My husband’s comment when he heard that was that all the tropical “spinaches” would lower cholesterol since they all use up more calories to chew and swallow, than they give. But he was being uncharitable, and in the case of okinawa spinach, entirely inaccurate. It’s not at all hard to chew.)

Various internet references (see refs at the bottom of this article) describe okinawa as being rich in protein, iron, potassium, calcium, and vitamin A.

It’s also said to have uses in traditional medicine but this is not something I've explored, and I couldn't find any solid references for it.

How to eat it

Young leaves and young shoot tips can be used as garnishes and in salads. This (below) is chickweed and okinawa, soon to be dressed with an olive oil and vinegar dressing. 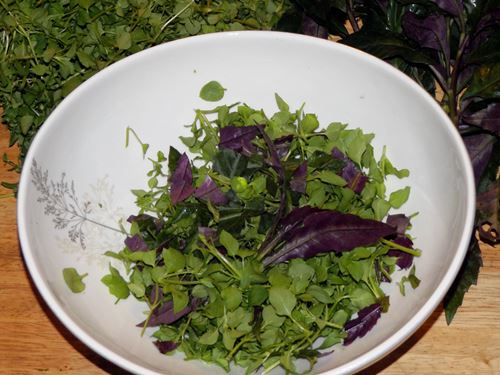 The green, young stems can be chopped as a vegetable and added at the last minute where-ever you’d use tender green veggies. I like them in stir fries.

The older leaves can be added to anything you’d use leafy greens in, but be sure to add them just before serving; overcooking makes them lose their wonderful color and they go a bit slimy.

In the image below, I’ve dumped a handful of okinawa leaves on top of some rice in a steamer. (Yes, you are right: I'm not a very imaginative cook. And I'm usually in a hurry.)

Don't leave it in the steamer any length of time; its ready to serve in the time it takes to get it from the stove top to the table. Maybe less.

But do cook it if you're not putting salad dressing on it; here's why. 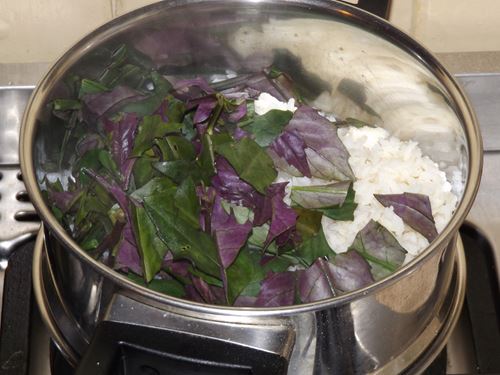 The flavor is unique, although not at all overpowering. It's described in other articles as being a "crisp, nutty taste with a faint hint of pine." I have no idea what pine tastes like, but I agree about "crisp and nutty" - so long as you haven't over-cooked it. (Did I mention that often enough?)

I think it would go well with this salad dressing with a little of the olive oil replaced with sesame oil. But no-one in my family likes sesame oil, so I haven't tried it yet.

Will your family eat salads with sesame oil in the dressing? Do you have any other okinawa suggestions? Please share below 🙂