Part 4 of a Series | 5 minute read | Also published on PermacultureNews.org

​All fencing arrangements but one, to a pig, are an invitation to scratch, lean, and shove until the fence has been mangled beyond recognition and the pig goes where it wants.

The one kind of fence that pigs won’t lean on is an electric fence. But electric fence is more a psychological barrier to a pig than a physical one and it’s important to give them the right impressions of electric fences from the very beginning.

​The ABC's of fence training

When our piglets first arrive, we house them in a completely pig proof pen so that they can settle in without fear of fences that bite, and we can sleep at night knowing they’ll still be there in the morning.

This will continue to be their indoor shelter after they are released into their large outdoor area, which is fenced only with a double strand of electric fencing.

After they’ve settled in and are coming confidently to be fed and enjoying being petted and scratched, it’s time for fence training. Here are the approximate steps we take to teach our piglets about electric fencing.

First, we build a double strand electric fence that divides their pen in two so that the pigs can see it and touch it to find out that it bites, without any option of escaping if they end up on the wrong side of it.

​The ​piglet training pen, divided roughly in half by the electric tape.

Occasionally a pig that has not come across electric fencing before will touch it with some part of its body other than its nose and will go forward rather than backward, resulting in a frightened escapee with no intention of going back where it came from.

Having the existing fence still in place during their initial electric fence introduction eliminates this problem. If a pig ends up on the wrong side of the electric fence, you can remove the strands, return the pig to the proper side of them, and put them up again.

Piglets learn fast. It takes very little time—a day or just a few hours—for them to understand that if the fence is across the enclosure, its best to stay behind it. ​First experience with the fence

​In the image above, Pig #1 wants to know what this new white thing is. The yellow circle is to draw your attention to Pig #2, in the middle, who is watching out of one eye to see what happens (very hard to see if you are on a small screen – just take my word for it). Pig #3 is fast asleep. 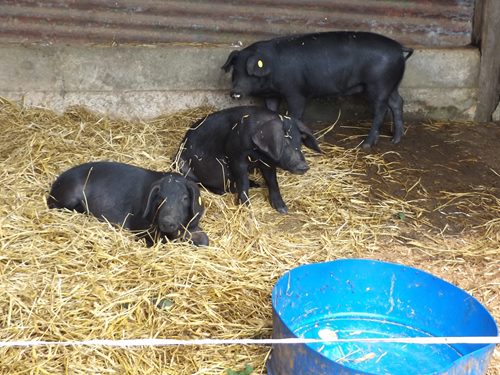 In the image above, Pig #1 is now at the back of the pen, never to touch another electric fence. Pig #2 (Still lying down) has probably got the message too. Pig #3 has just sat up and is wondering what happened.

In the image above, Pig #1 is regaining confidence that the fence won’t come chasing after her. Pig #2 has gone back to sleep (probably with the lesson well-learned) and Pig #3 is still sitting in the same position, and still wondering what happened.

The next thing is to remove the electric fence and let them have the full enclosure again. This allows the pigs to learn that it’s not the space where the fence was that bites, but the strands of tape.

This is helpful for if you are going to want to be moving your pigs’ outdoor pens around in future – much better than having your pigs baulk at an imaginary line where the fence used to be and refusing to cross it.

If you haven’t done so already, now is the time to teach the piglets to follow you around and be rewarded with tasty treats from a bucket.

The better they are at coming running when they see that bucket and following you for treats back and forth across the space were the tape was, the easier the next steps will be and the easier it will be to lure them back in if the unthinkable happens.

​Finally, you and your piglets are ready for the great outdoors.

Start this when they’re hungry. Open their pen and lead them a short distance into their outdoor area, with a bucket of their favorite treats in hand. Don’t go far at first. Feed them a little, lead them back, and feed them a little more in their small, safe pen.

Go in and out like this, offering treats to keep them following you, and then start to wait a while between treats to allow them to drift away from you and explore their new space. As you lead them about, go near enough to the electric fence for them to see it as they begin their explorations.

Keep in mind that piglets can turn on a surprising burst of speed if they get scared or suddenly feel playful now that they are out in a larger area. Newly freed piglets are bound to do some crazy running (very fun to watch) and if they get scared you want them to be able to make a beeline for the place they consider safe–the pen they’ve been living in—without getting lost and confused on the way.

You also want them to have discovered the external electric fence ideally BEFORE they start running.

If you’ve followed these steps you should find that even pelting at full speed, they’ll skid to a stop as they approach the electric fence.

AND, if you’ve done a good job of building their confidence to come to you and follow you for food, you’ll have a way of getting them back if they do end up outside.

​For the first few days, we lock our piglets back in their safe small pen when we’re not going to be around to keep an eye on them, and at night.

Then ​when they are fully familiar with where the entire outside perimeter is, and they are behaving in a relaxed and confident way in the whole area, we leave the small pen open out into the big one so that they can come and go as they please.

(We probably would continue to lock them up at night until they were bigger if we were worried about large predators, but that isn’t an issue where we live).

​​​​​There's something wrong when piglets are ​​hiding underneath one another inside an electric fence​.

There are simpler ways, with less steps involved, to teach pigs about electric fence. We’ve tried most of them and found that a large dose of luck is needed for things to work out right.

The steps I’ve just described rely on using lots of careful preparation, rather than relying on luck.

A mentor of ours in a former life liked to say that, “prior and proper preparation prevents poor performance.” It’s a saying that’s served us well every time we’ve remembered to apply it.

As well as preventing the poor final outcome of pigs that don’t respect or understand electric fence, these steps will minimize the chances of your piglets being badly frightened at any time during the fence training process.

There’s something wrong with the picture of piglets cowering together in the middle of an electric fenced area, trying to find safety by hiding underneath one another.

You want the whole thing to be as stress-free as possible for them, as well as for you.

This article concludes this Series for now – but as always, there is much more still to learn.

In particular we are still exploring ways to keep our pigs’ outdoor area clean and fresh for them since we decided to try keeping them in one place. (If you missed the bit about how we came to this decision, its covered in Part 1 of this Series.)

I’ll cover the topic of keeping a stationary pig pen from becoming a muddy, manure-filled moonscape ​in a future add-on article as ​soon as we’ve had time to try out our current ideas and have something worthwhile to share.

​Find all the currently published posts in this Series, here.