Stinging Nettle: Nourishment for You and Your Garden 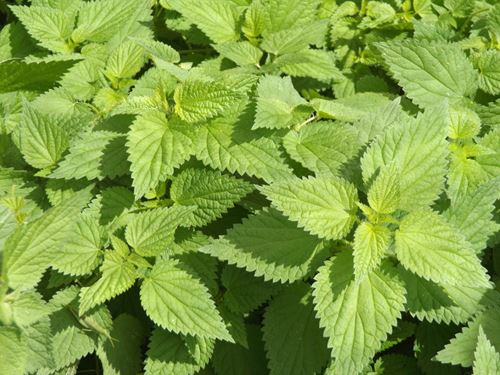 Stinging Nettle: Nourishment for
You and Your Garden

Stinging nettle has a long history of use for food, medicine, cordage, and dye. Here are some ideas for making use of the free food and fertilizer that this under-appreciated weed has to offer.

A persistent and useful weed

Stinging nettle (Urtica dioica) originated in Europe but now grows on every continent but Antarctica, where-ever there is fertile, moist soil and particularly where the soil has been disturbed.

I have a personal theory that the plants (“weeds”) that most persistently follow human beings about are those that have the most to offer us in terms of medicine, food, help in our gardens, and other useful things.

If there is anything to that theory, then nettle must be among the most useful of them all. Not only does nettle follow us about but it leaves us in no doubt, when we brush against it, about its presence and identity.

If you're wild-harvesting nettle, look for it near stream banks and ponds, and in low, shady areas. You’ll often find it sneaking along beside, through, or under the walls of barns, stables, gardens, and houses.

If you want your very own nettle patch, nettles are easy to grow and to propagate from runners. They spread easily, sending long exploratory runners surprising distances under or between things and popping up where you least expect them. Keep this in mind when you consider where your nettle patch should be.

Nettles like a bit of shade, but will tolerate full sun as long as they don’t dry out.

For a long time, I kept my stinging nettle in a tub out of the way of people because I didn't want it to sting anybody. But the trouble was I never thought of using it, and it couldn't spread out beyond the confines of its tub.

Why would I want a stinging plant to spread out? Read on, and I'll tell you a number of reasons why. 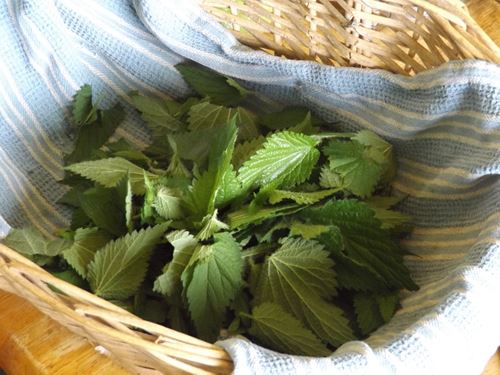 Stinging nettle is a super-food

Although it's often talked about in terms of its medicinal properties, I prefer to think of nettle as a food. And not just any food, but a super-food. (I’ve shared some links at the end of this article to resources that describe its amazing nutritional profile.)

Thinking of nettle as a super-food reminds me to eat it often as a cooked green (it loses its sting when you cook it).

If I'm planning to eat it, I harvest the tips (wearing gloves) and snip the leaves into a bowl.

Caution: Nettle can be harvested for eating any time except when it's flowering or seeding. Once nettle flowers and goes to seed, its leaves may be potentially harmful to your kidneys if you consume a lot of it. 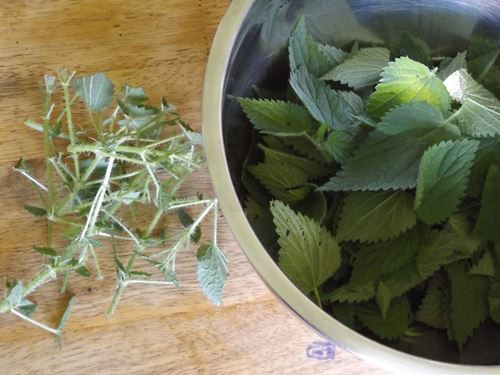 Then I drop the leaves into stir fries and what I call "bubble'n'squeaks"...

(Bubble'n'squeak, at our place: a meal made from left over veggies, bits of bacon or other meats, and other odd items found in jars in the fridge, mixed and heated in a fry pan and usually graced with greens from the garden. Like nettle leaves.) 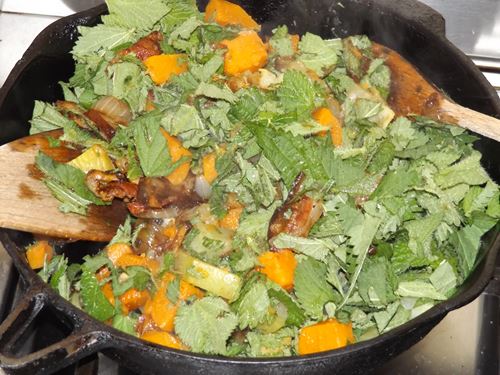 Or I drop them into soups. This is a pan of chicken broth with nettle added... 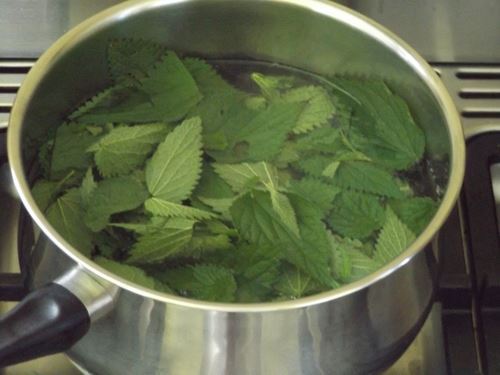 and this is the same pot with some white sweet potato added and the stick blender employed... 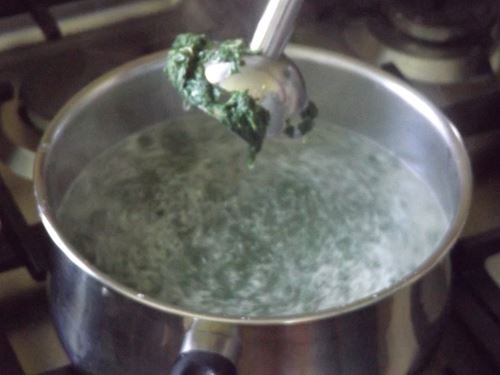 To make a creamy, nourishing soup that's delicious with chunks of bacon or feta cheese added... 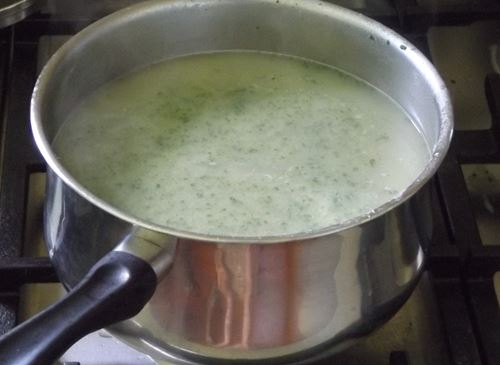 This batch of chicken and nettle soup had bits of chicken meat in it. A complete meal, as far as I'm concerned. 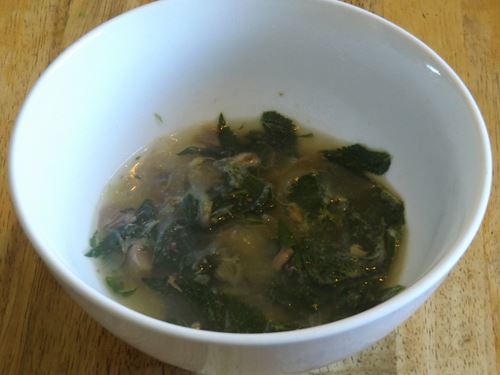 So those are some ways to use nettle in the kitchen; what about the garden?

Stinging nettle in our garden

Besides feeding us, our nettle patch also nourishes our garden and compost bins.

This is why I decided I wanted a larger patch of it, and why I put it where it could spread into a pathway: to remind me to harvest it often and use it well.

This is our nettle patch, beside the main pathway through our garden. It's broadcasting a clear message: "It's time to harvest a large amount of nettle and make nettle fertilizer tea."

If I miss the message for too much longer, someone is going to get stung, to remind me. 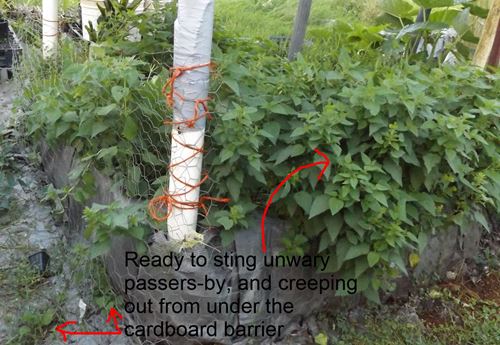 (In defense of baling twine: when I had nearly finished this article, I looked at this picture properly and realized there was a messy piece of baling twine right in the middle of it. I know. How did I miss that?!

I decided to leave it as it was rather than go outside, secure that chicken netting by some other means, take another picture, re-edit it, and re-load it. Just to remind me and you that its not necessary to be super-human. Or not more super-human than we are already being.) 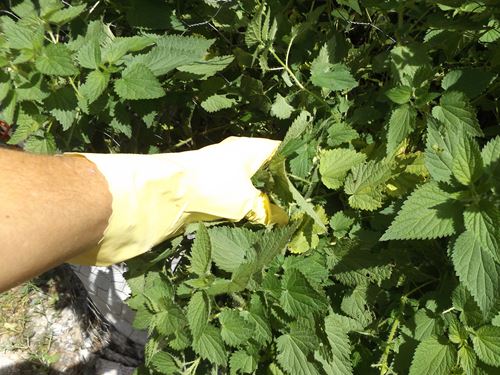 I wanted to show you cutting the nettle back at the edge of the bed, but I needed my cutting hand to hold the camera. You get the idea.

Same bed (below), with nettle harvested and a new cardboard barrier in place.

The chicken wire was put there to keep the bandicoots out of this section of raised beds. It pre-dates the nettle; if I did this from scratch, I wouldn't bother protecting the nettle from bandicoots. Yes, that piece of baling twine is still there. 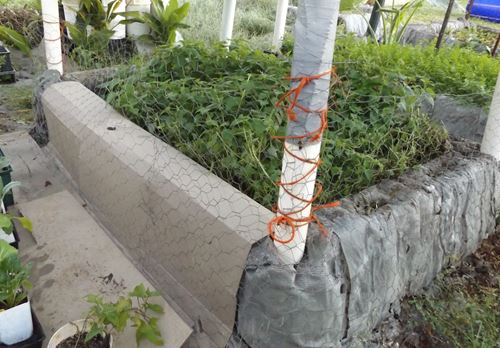 Stinging nettle is a super-fertilizer

This is where all that nettle went: chopped into a 20-liter bucket... 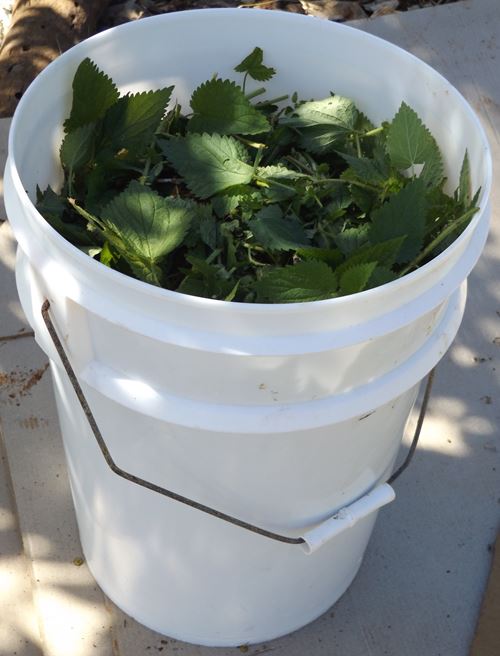 Weighted down with a rock and covered with water... 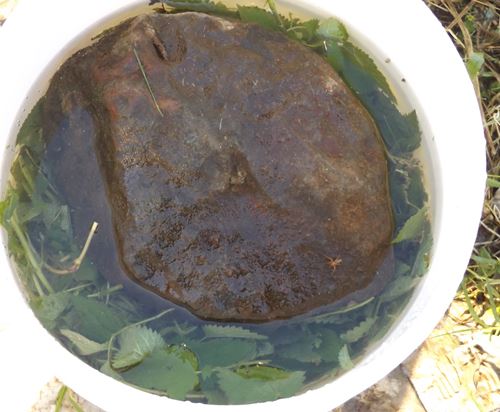 After 2 to 3 weeks in the shade with a loose lid on to let air in and keep critters out, this will be a black liquid smelling a lot like cow dung: liquid fertilizer.

(Don't keep it near the house. It actually smells more like cow dung than cow dung does. Take it from someone who is very familiar with both smells.)

Your compost heap will love it, too, if you have excess after feeding your plants.

Don't use it on a given garden bed or potted plant more often than about once every 3 to 4 weeks.

When the bucket gets low, it can be topped up with more water a few times. You may want to reduce the amount of water you dilute it with when you think it’s getting a bit weaker. And when you think it’s done or you have a new batch ready, put the plant material and any left-over liquid on the compost.

All this food, fertilizer, and what-ever other uses you might want to put nettle to—there are many, some detailed in the book and articles I've listed below—is available for very little effort on your part.

Just find the right spot, establish your nettle patch, and enjoy. Depending on your climate, you may have nettles available year-round (remember not to eat/drink the leaves while its flowering/seeding) or every spring. The only real work involved in maintaining a nettle patch is harvesting from it.

I've been a nettle fan ever since I first read about nettle in Susun Weed's book, Healing Wise - which was about the best introduction I can imagine.

Above: nettle infusion, a staple drink in our house, which I learned about in Healing Wise. But you don't have to read that book to learn how to make nourishing herbal infusions; you can learn quickly online, here.

And here are some interesting nettle articles...

Was this helpful? Do you have questions? Do you have other nettle recipes or garden applications that you could share? Please leave a comment below 🙂