Growing our own milk, eggs, and / or meat is a step in the right direction, but relying on the feed store to help us do it means we’re still relying on fossil fuel-based agriculture and supply systems.

Since our goal is to reduce our dependence on fossil fuels, at the time of writing this article I was growing an increasing amount of our own goat feed, for our two milking goats.

To make it onto the list that you’re about to read, these plants had to be great for goat fodder, AND serve a variety of other functions as well.

(Please note that some of the plants listed here were also listed in “8 Abundant Fodder Forest Plants, and How to Use Them.”) 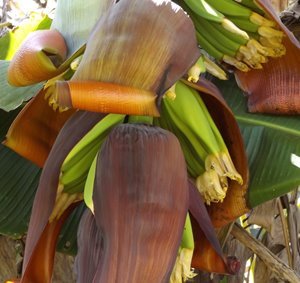 Goats love unripe bananas, chopped up in their feed bin or handed to them by an accommodating human. Green bananas can also be cooked and eaten by people. And of course ripe bananas can feed people, pigs, and chickens.

Goats and cattle love banana fronds, and the goats will also shred and eat banana trunks.

A whole banana tree stood upright where the goats can eat the fronds, and shred and eat the trunk, will keep them happy for hours. For the scientifically minded, here is a good reference article from Feedipedia.org about using banana plants for fodder.

Cattle love banana fronds too, and they will also eat banana trunks, but they need a bit of help shredding or chopping them first.

Goats and pigs will eat the large bell-shaped male flower that you cut off below the bunch after the bananas have finished forming.

People can eat the banana flower too, but my sole attempt to prepare it for the table was no-where near as successful as just throwing the whole thing to the pigs, or cutting it into chunks for the goats.

Besides food and fodder production, banana patches are also great for mopping up excess nutrients and moisture. Ours are situated in our grey water runoff area, and downslope from our large compost bins – where they catch the excess nutrient and convert it into food, fodder, and mulch material rather than allowing it to flow down the hill and glug up our creek.

When there are any spare from the goats, banana trunks make a great source of mulch, or material for the compost bin. Earthworms love banana trunks.

Banana trunks can also be laid along the contour on a slope to slow water runoff and catch sediment to increase fertility.

Banana plants go up fast if it’s warm and there’s ample moisture and nutrient, and could “hold” an area while you figure out what else you want to grow there; they’d be easy to convert into mulch and compostable material once you don't need them anymore.

In my opinion its impossible to have too many banana trees.

Queensland Arrowroot was once used as fodder on a broad scale in the Qld Dairy Industry. It is one of the few plants that goats will eat endless amounts of.

Goats and cattle love the foliage of Queensland Arrowroot.

The pigs prefer pumpkins or sweet potatoes, but in the absence of those they’ll eat arrowroot tubers and stems.

We’ve had some pigs that just love arrowroot tubers thrown to them as is; and some that are like, “Meh.” (I think they may have been a little too well fed.)

I've cooked arrowroot tubers for pigs who don't like them raw. I put them in a pot, cover them with water, bring that to the boil, then turn off the heat and let it sit for 8 to 12 hours. Even our fussy pigs have loved them like this.

People can eat arrowroot tubers too. Choose small to medium ones for the kitchen; the larger ones are too fibrous. A quick internet search will yield lots of ways to prepare arrowroot for eating.

People can eat arrowroot tubers too. Choose small to medium ones for the kitchen; the larger ones are too fibrous.

Poultry love arrowroot foliage. If they’re allowed access to them, chickens will also peck away at the tubers. In the future, I have it in mind to experiment with finding out if the starchy tubers can replace any part of the grain in the chooks’ diet.

Queensland Arrowroot is a useful plant in many other ways beside the critters it can feed:

Harvesting arrowroot tubers gets easier the thicker the clump is – gradually, tubers are pushed up so they’re easier to pluck out.

Or, you can push a shovel down between the stems to cut off a clump of tubers and stems, pull it out, and sort – medium sized tubers for the kitchen, big old tubers for the pigs, stems for the pigs, goats, or cattle, and small sprouting tubers as planting material to spread your arrowroot plantation.

Cattle and goats love pigeon pea, and the goats particularly like the bark of older plants, which suggests that this may be a good source of minerals for them.

Pigeon pea can be cut and placed upright in a feeder to eat immediately, or to dry, becoming more “hay-like” – some of the animals seem to prefer it this way.

Pigeon pea is a short-lived (3 to 5 years) legume, providing nitrogen in the soil. (You almost certainly knew already that legume's provide nitrogen. But just in case you didn't.)

As a nursery plant for protecting other things, pigeon goes up relatively fast and provides dappled shade (important in our area where the sun can come out after weeks of drizzly weather, and fry everything that doesn’t have some protection). 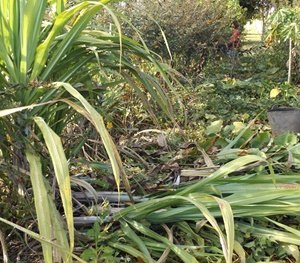 Pigeon pea responds beautifully to pruning with more growth, and reseeds itself easily from seed that you can collect from the plants and scatter about.

The seed can be eaten by the chickens. (You may have to teach them, at first.)

People can eat the seeds too – it’s a common food in India, Asia, Africa, and Latin America. This Wikipedia article gets into the origins, cultivation, and uses of pigeon pea for human consumption.

Horses can be fed pigeon pea as a large part of a working ration, according to an obscure PDF I found on the internet. I’ve been using the green tips chopped into horse feed as a chaff replacement, with so far apparently good effects.

Horses can learn to hold down a stem with a front foot, and pull it apart with their teeth. They don’t leave much behind.

Pigs like the stem, too – as food and to play with.

Sugar cane is also useful as a chop and drop mulch, or as part of a fast-growing screen / windbreak.

It grows easily from the bottom part of the stalk laid down on the ground with a little mulch over it, so long as there is adequate moisture. Chop and drop only the leaves if you don’t want the stems sprouting into new sugar cane plants.

My children like to chew on portions of stem that have been cut open for them. (Poor, sugar deprived children.)

– the goats, the pigs, the cattle, the chooks, and… the guinea pigs. I haven’t tried horses on tree lettuce yet, but I’ll be surprised if it can’t form a small part of a horse’s diet.

We use the young leaves in salads just like regular lettuce. A friend of mine says he uses it as a cooked green.

It has no pests that I’m aware of, and it self-seeds prolifically. A zero-maintenance volunteer plant.

It grows at least a meter tall in its rapid efforts to send up a seed head, and when you cut one of those tall leafy stalks off for the goats, the plant produces another stem and does it all again. If you don’t want it to go to seed or feed it to anybody, you can cut it off and lay it down for mulch.

About a cut and carry fodder system

With cut and carry fodder and pasture rotation we eliminated chemical wormers from our system.

All of the above can be fed to the goats in a cut and carry system, which sounds labor intensive but is not as bad as you would think for only two goats, so long as the fodder is growing near, or on the way to, the goats.

I place the fodder upright in a wooden pallet tied against a fence or wall. It holds the fodder up off the ground, and the goats can browse as they naturally would, often standing their front feet on the pallet to reach up for the high bits.

A cut and carry system has an advantage in terms of parasite control for goats. If the goats are fed up off the ground, so that their manure never comes anywhere near their feed, the life-cycle of their internal  parasites is effectively broken.

Using cut and carry fodder, and rotating our goats’ pasture access from one small area to another rather than letting them have the whole area at once, we were able to eliminate the use of chemical wormers.

Other goat fodder plants that won't stand up in a feeder

There are many other potential fodder plants that a dedicated small scale goat farmer could make use of.

The ability to stand upright in a pallet is another advantage of all the fodders I listed above.

Sweet potato vines, nasturtium vines, spent bean vines, comfrey leaves, and some of the tropical spinach's all make excellent goat fodder except that they don't work for standing up in the pallet feeder.

I’ve had success with some of these by growing them where they can tumble down over the edge of a wall or raised bed and the goats can browse on them there.

(Obviously, it takes some fiddling to arrange it so that they browse on what’s growing over the edge, without jumping up to stomp on the beds themselves.)

Our fodder growing efforts allowed us to reduce our hay and chaff bill by about three quarters.

Our goat fodder growing efforts enabled us to reduce the hay and chaff we were buying for our two goats by about three quarters – a good step towards our goal of feed store independence.

We’ve sold the goats since this article was written. In their place we now have a house cow, who copes better with our extended wet periods.

But the fodder forest we planted for the goats is still relevant and useful for feeding all of our animals, house cow included, which illustrates the advantage of choosing multi-function plants.