How to Harvest and Use Queensland Arrowroot 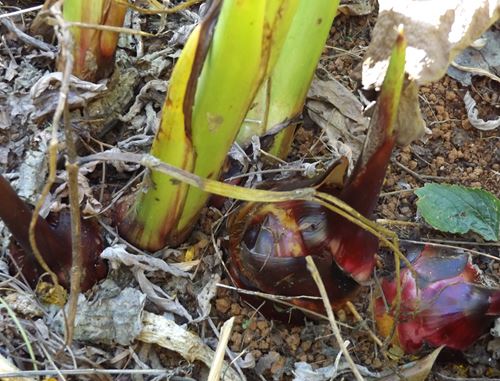 How to Harvest and Use Queensland Arrowroot

​Queensland arrowroot ​(Canna edulis) provides food for us, food for chickens, pigs, cattle and goats, mulch and/or compost material, and shelter for other plants. It's super easy to grow and to harvest and it self-propagates to a certain extent but is not weedy or invasive. And I think it looks beautiful.

What more could a polyculture food grower ask?

​Recently we tidied up an area where we had a sea of mature arrowroot ​in need of maintenance. ​ 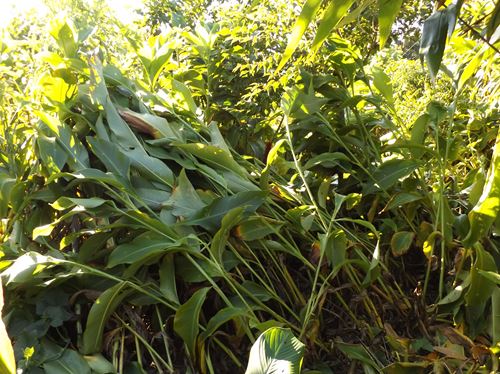 ​A sea of arrowroot is a very good thing to have, so long as you remember to get to it before it drowns the young fruit trees it's supposed to be protecting. In this picture (above) the arrowroot was planted in a windy area as part of a shelter belt for young trees, and the wind has gotten the better of it. 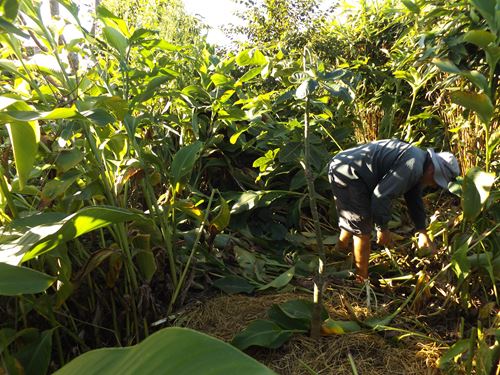 ​When mature arrowroot gets too crowded, it grows tall and ​spindly, as you can see to the left in the picture above. Here, Alain is "chopping and dropping" -- cutting down the long stems and foliage and laying them ​on the ground to form a layer of mulch. 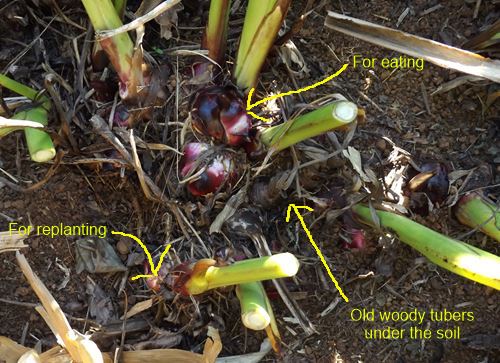 ​In the picture above you can see the base of the arrowroot after the stems have been cut down (and the litter cleared away for you to see better).

This clump can be lifted with a garden fork and broken up. From it we'll get very small round ​rhizomes attached to stems for replanting, larger young rhizomes/tubers for eating, and older, woody tubers ​(ideas on what to do with those are below). ​

​In a mature arrowroot planting it's a good idea to lift old clumps when they get crowded and congested​, otherwise the older, woody tubers ​lift the ​new ones above soil level so that they cant reach the earth, and then they produce weak, thin stems. 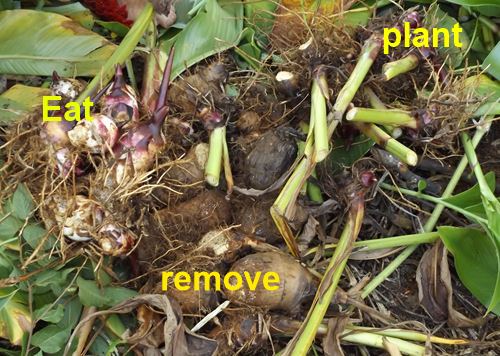 ​Here (above) is a pile from several clumps we've lifted and broken ​up. You can see young white and purple tubers for eating (top left), old woody tubers that needed to be removed from underneath young ones (middle), and small round rhizomes attached to stems, ​for replanting (top right).

​Note that when I say "remove" the old woody tubers, I don't mean "discard." If you have no ​other use for them, chop them roughly with a shovel and return them to the mulch layer here, to feed the soil so it can feed more arrowroot for you. ​(I've suggested some other uses, below.) 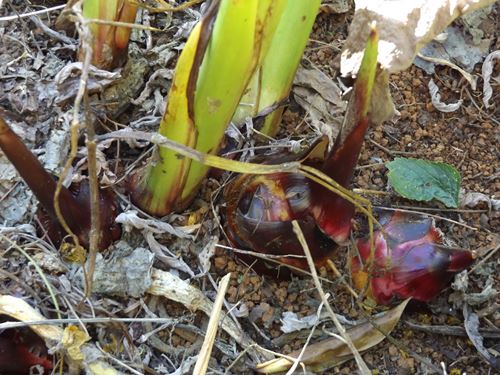 ​In the picture above you can see the beautiful purplish tubers sitting just at soil level.

If you leave these, they'll produce thick stems like the green stems you can see in the pic. If you harvest them now, the ​two on the right will be good to eat and the ​one on the left will be good for replanting somewhere else, or replanting in the same spot. 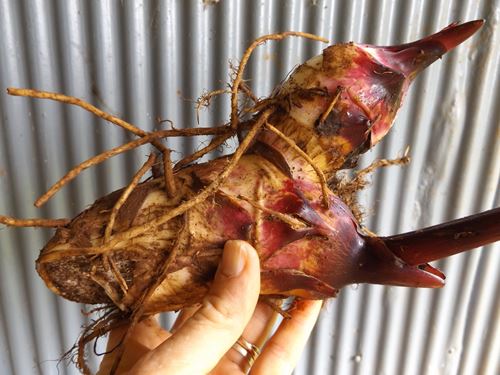 This picture (above) shows a large but still young and fresh tuber (two, actually) for eating.

Notice that the areas between and below the purplish color are still white and fresh-looking, not brown and woody looking like in the pic below. 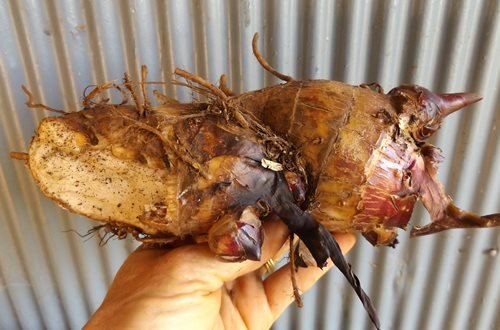 This picture shows a large, older tuber. You can eat this, but it will be harder to peel and ​more fibrous to eat.

It's best suited for:

Here you can see a row of our food forest after the arrowroot tidy-up session. Lots of mulch on the ground (above) and two armloads of food and propagation material (below). 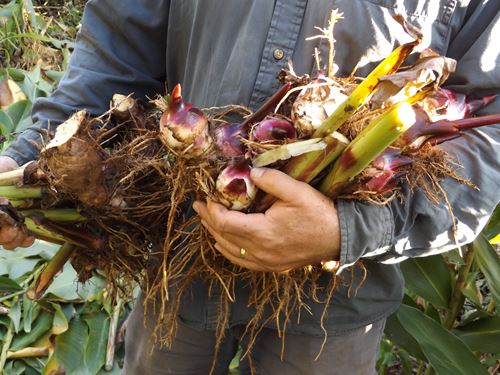 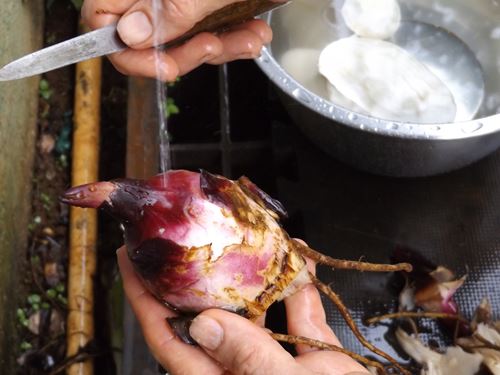 ​I ​made a short video ​showing ​how I peel an arrowroot tuber to prepare it for cooking. ​I wanted to embed it here for you, but I haven't ​been able to figure that part out yet. So you'll just have to use this link, then ​​come back here to read the ​arrowroot cooking tips next... 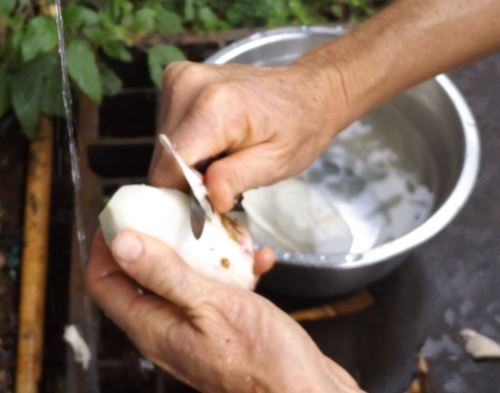 ​I like to peel arrowroot tubers outdoors, under running water -- that way I don't have to have them super clean before I start peeling, since the soil and debris comes off with the peel.

Start at the top, where the shoot emerges. Cut off the shoot, but not all the way -- then grip it between thumb and knife and pull.  A long strip of skin should pull off. ​If you watched​ the video​, you'll have seen this clearly.

Put your peeled tuber in a bowl of water and keep it submerged till it's ready to cut, so it doesn't turn brown.

If you have too many to use in one meal, either put them in a bag in the fridge with most of the dirt washed off but the skins still on, or peel them and then store them in the fridge in a lidded tub, submerged in water. They'll keep at least several days, longer with a change of water. 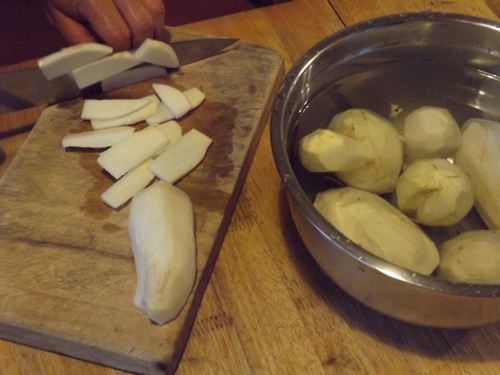 Above, you can see arrowroot tubers peeled and sitting in a bowl of water, ready for chopping. They're in water because they go brown if you leave them out in the air after peeling.

We deep-fried the slices in the picture, in our home-grown and home-rendered lard.

Deep-fried arrowroot chips are not the same as potato chips, but in our opinion they're a fair substitute.

Keep a close eye on them as they start to brown slightly in the ​fat -- soon after they start to go ever so slightly brown, they'll quickly go from "just done" to "overdone." The don't really get crispy. Done, they're ​still soft enough to chew; overdone, they're unpleasantly hard.

Arrowroot chopped ​up and shallow-fried

My latest favorite way to eat arrowroot is chopped and ​shallow fried in bacon fat (or your cooking fat of choice) ​with other veggies.

Cooked like this it becomes a bit more potato-like in consistency, and I ​like it's mild, pleasant flavor. It goes with everything.

Last night we had arrowroot, choko and onion fried up together till soft, then I added chopped winged beans and sweet leaf right before serving. And a dash of soy sauce. 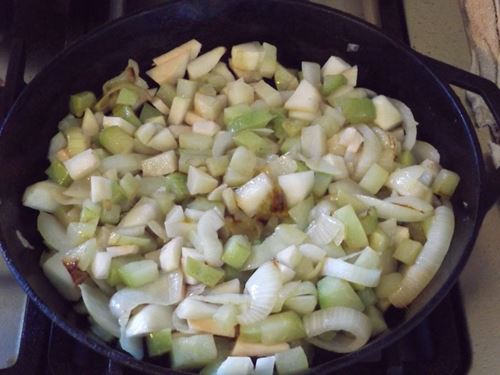 Arrowroot chopped into a soup or a stew

Chopped up and dropped into a soup or a stew, arrowroot will keep its crunch no matter how long you cook it. It still goes with everything, and it makes a great meal extender.

Even if I had never gotten consistent about using arrowroot in the kitchen, I would still have kept it in many plantings around our place for its many other uses.

But now that I’m getting better at harvesting and preparing arrowroot quickly for our kitchen, our arrowroot plantings will be better maintained and we’ll better fed, and one small step closer to our goal of supermarket independence.

Please let me know if you like this type of post with more pics and less words, more "how-to" and less "philosophy"...

...and please share your comments, recipes, or questions about arrowroot -- thanks in advance!