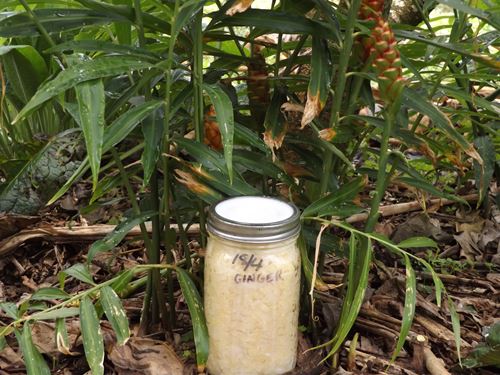 This post is about how the ginger growing in our garden has inspired successful homemade sauerkraut in our kitchen, and how that in turn has inspired better maintenance of the ginger plants in the garden.

I've tried making sauerkraut a few times over the years but my efforts have usually met with a distinct lack of enthusiasm.

Then recently during a meal, my daughter said, "Can I have some of the yummy stuff?"

She was referring to homemade sauerkraut. (If you like, you can jump straight to the Sauerkraut Recipe.)

I would never in a gazillion years have dreamed that I could make sauerkraut that my kids would call, "the yummy stuff," or at least not without another ten years of practice, at the rate I was going.

Until I tried adding ginger. 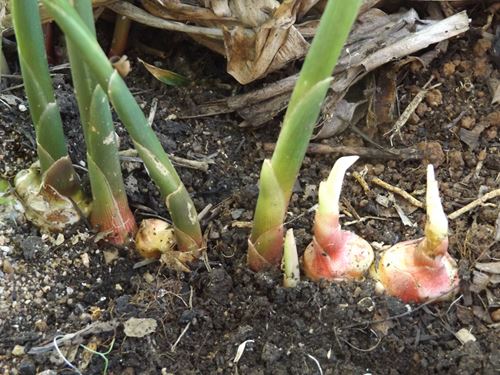 I've always had ginger (Zingiber oficenale) in pots and in the garden, and in my mental list of plants that I should be making better use of, but I hadn't established a habit of using it consistently. And as with anything you don't use very much, it's been forgotten and neglected.

Periodically when I'm out and about, I come across ginger in a pot and I think, "Ginger!" I bring some home, and each time the unfortunate ginger plant either languishes in its pot or disappears into the undergrowth in a neglected garden corner.

Last year (2019) we started working on establishing a small food forest across from our back door, and ginger was one of the under-story plants we put in.

So recently when I thought of adding ginger to homemade sauerkraut, I went out to see how the ginger was doing, and this is what I found... 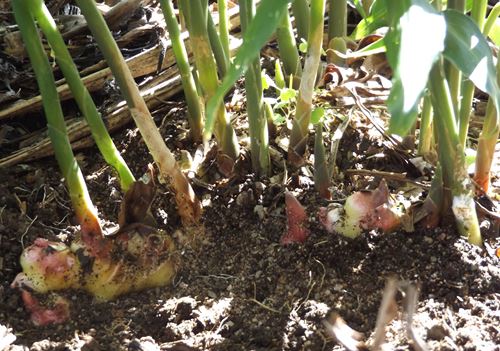 I've brushed the mulch away so you can see the beautiful rhizomes peeking out above the soil. What a pleasant surprise it was to find that the little clump I planted a few months ago and then forgot about has approximately doubled in size 🙂

In the next pic I've placed a knife where I decided to cut, to harvest a little of the underground rhizome without disturbing the rest of the plant... 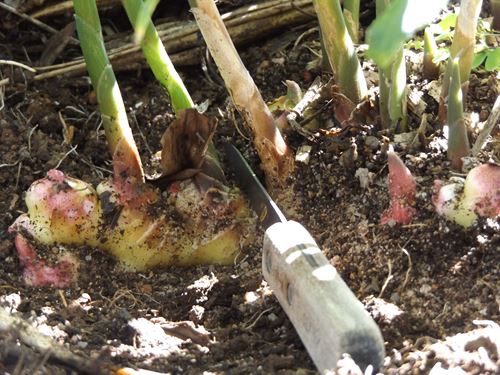 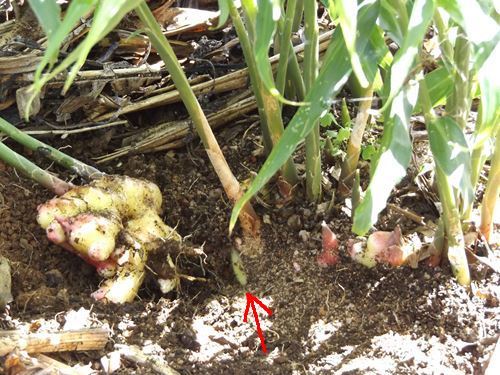 The red arrow (above) points to the place I cut, to free the piece of rhizome from the mother plant. 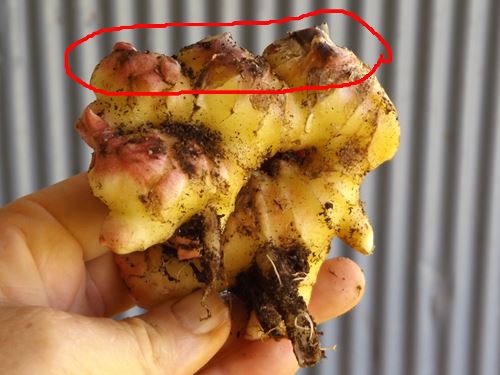 This is what it looked like with the soil shaken off it. The red circle indicates the part that could be seen above the ground. 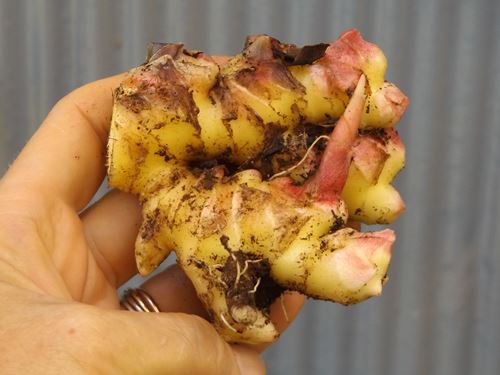 This is the other side of the same piece. I could plant it in a new spot, and several new stems would grow and there'd be more ginger. 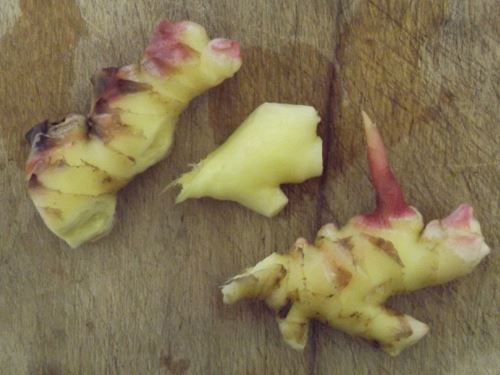 I didn't plant it. This is what it looked like washed and broken into pieces; the middle piece peeled.

Ginger goes dormant during the cool season (and its surprising what low temps it can cope with - if you get real winters and you fear you may not be able to grow ginger, check out this article).

As it moves into dormancy, the ginger rhizome forms a hard, protective skin to protect itself till growing season comes again. In these pics, this skin has not formed yet, so peeling it was as simple as scratching at it with my finger nails under running water.

Ginger without its hard protective skin won't store well, so if you harvest it during its growing season, dig up only what you plan to use right away.

So much for ginger in the garden. What about ginger in sauerkraut?

Sauerkraut is very simple to make. It calls for cabbage and salt + time and the actions of the friendly microbiota that turn "cabbage" into "magic".

You can also add whatever other vegetables or spices or herbs you like -- in this case, fresh ginger. (If you don't have access to fresh ginger, I think this would work with preserved ginger but I haven't tried it myself.)

This is such a flexible, forgiving process, that I think one of the things that put me off making it for a long time was the lack of hard and fast rules about how to do it.

A key for me in figuring it all out has been to make small quantities, often. That way it doesn't take too long to eat your failures, and you get to learn what works for you sooner.

STEP 1: Clear the kid's artwork off the kitchen table and clean the surface up a bit so nothing unfriendly can invite itself to the sauerkraut party. 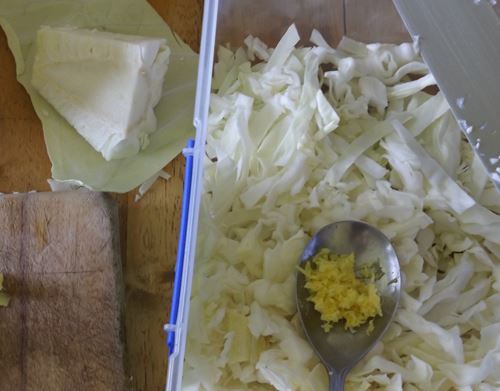 STEP 3: Discard any dirty outer cabbage leaves, but keep several large, clean outer leaves intact. I also keep the core of the cabbage, as in the upper left of the pic above. I may want to use that later, along with the leaves, to help keep the 'kraut submerged in its juices.

STEP 4: I slice the cabbage and put it in the mixing container, add the finely grated ginger, and sprinkle it all with salt.

How much salt, and how much ginger?

In my last batch, I used about a tablespoon of grated ginger to one medium cabbage, and it turned out pretty good. More would have been too much for my kids and I; we're not into overly spicy food.

Seasoning is personal: start by erring on the side of caution, mix it up and taste, then add more if you want to. And make small batches, so you can learn quickly what works for your family. 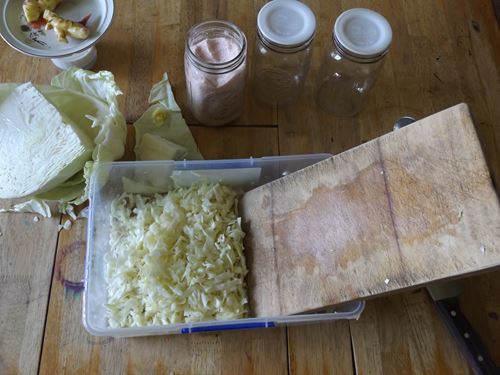 I mix and massage first with my hands (and this is also when I taste-test), then I pound with the end of my chopping board. That's why I'm using a square tub - it fits the board just right.

When I'm tired of pounding, I use my hands again. 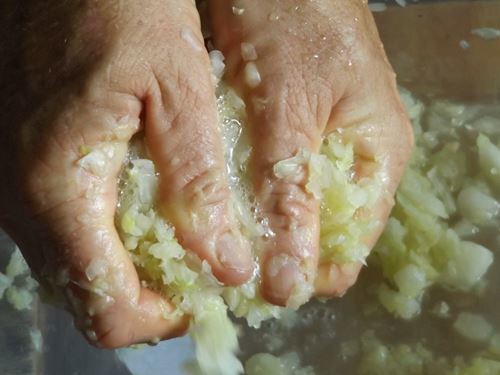 In the pic above, you can see foamy, bubbly juice running from the cabbage when I squeeze it, and the cabbage has lost its crispness, feels softer, and looks as if it's been lightly steamed: it's ready.

Nov '21 UPDATE: Lately I've been getting lazier with my 'kraut making.

I've found that it's ok to pack the salted, mixed cabbage into a jar and pound it (with the handle of a wooden spatula or any other appropriate tool) to bruise it and release the juice as I'm packing it, rather than pounding and massaging it to get it to release its juices in a tub before packing it.

It still releases more than enough juice to cover itself, and the whole process is a bit quicker and simpler.

STEP 6: Next, pack it into whatever it's going to ferment in. Pack it down hard. Alternate between pounding with a blunt tool and pressing with your hands/fingers/whatever you can fit comfortably into your jar. The juice will rise to cover it, and that's when you'll know you've bruised it enough and packed it tightly enough. (You also want to remove any air pockets.)

I've always found that I have an excess of juice, but various sources say its ok to add a little brine if you need to.

STEP 7: Now you need to devise a way to keep the 'kraut fully submerged in its liquid while it's fermenting. Fold a clean cabbage leaf to the right size, place it on top of the 'kraut, and push it down until the liquid rises over it. Then arrange something that will hold the 'kraut and its cabbage leaf "plug" down when the lid of your fermenting vessel is on.

Initially for this batch I used a folded wad of cabbage leaf with a piece of cabbage core on top of it, but today when I went to check, the cabbage leaf and the core had gone moldy because they weren't fully submerged... 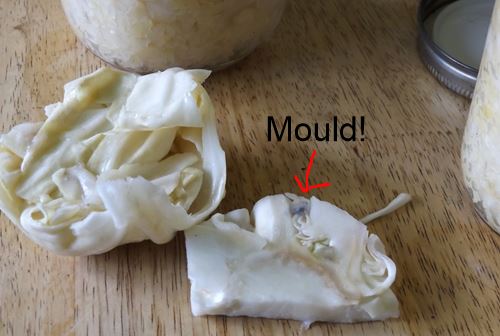 So, I gave those moldy bits of cabbage to the chooks and found myself a new clean cabbage leaf and a piece of carrot with which to hold it down... 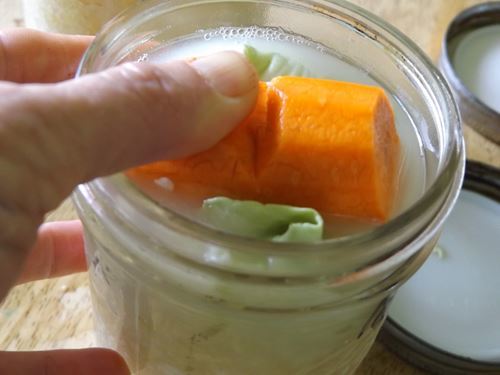 All the way down: 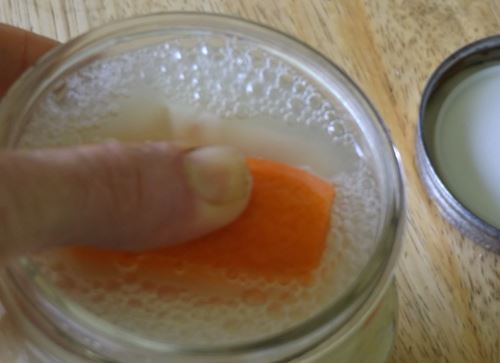 The lid must hold down the cabbage leaf plug, keep out dirt and insects, and ideally allow gas and rising liquids to escape if they need to (leave the lid a wee bit loose, or check and "burp" your jar every day during the beginning of the ferment period).

STEP 8: Put the date on your 'kraut and put it somewhere cool and out of direct sunlight, to ferment. Put your jars in a tub or on a tray or saucer, because they are going to leak for the first few days. 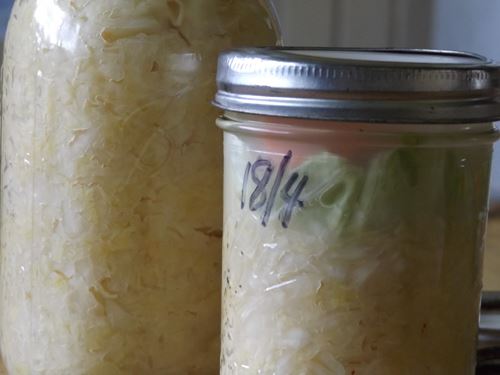 How do you know when it's ready? When it tastes good!

I get the kids to start taste testing after about 8 days, and "ready to eat" is usually somewhere between days 8 and 12, but I've read about people beginning to taste test after three days, and I also know someone who leaves hers for up to 6 weeks (although she uses huge professional crocks and is careful to keep them at lower temperatures than I could in my kitchen).

As a postscript, we've now started eating this batch and it still earns the "yummy stuff" accolade. The mold didn't do any harm at all.

So, after my daughter asked for "the yummy stuff," I decided we need more ginger growing near the back door.

I found a spot where some arrowroot was crowding in between two patches of yakon, and removed the arrowroot. 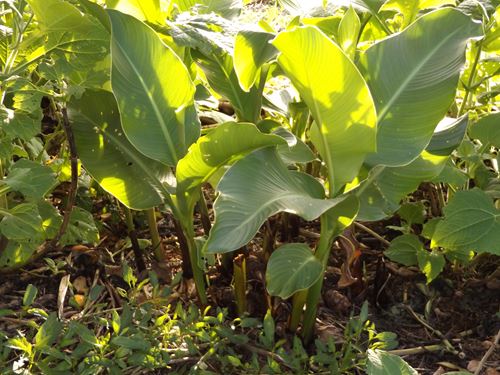 (I thanked the arrowroot nicely for holding that space and asked if it would mind going to a nearby spot in the next day or so, to create another nice environment for yet more ginger, or maybe some pineapples, in the future. It said it would be happy to help.)

Next, I found some neglected ginger in pots, and planted them in the lovely soil that the arrowroot had been caring for. They're a bit hard to see, so I added some red arrows... 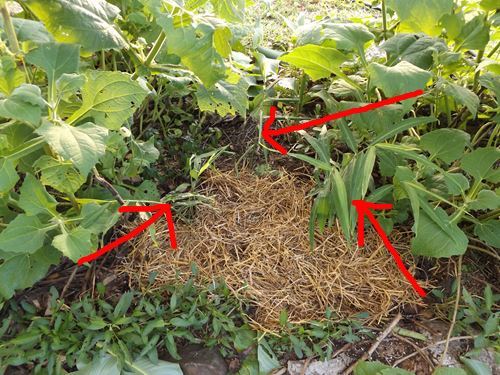 This spot has moist, fertile soil and direct early morning sunlight with dappled shade the rest of the day, so the ginger should thrive here.

And now that I have a regular use for it, I'm confident it will be much better cared for than it has been in the past.

The path back to food sovereignty

This is one more connection between our garden and our kitchen. There is magic in connections; they work to support our health and the health of our environment in many direct and indirect ways.

It's also one more small step away from supermarket dependence — and because it's a well connected step, its likely to hold, to provide a durable stepping stone on the path back to food sovereignty.

Was this helpful? Do you have questions? Or did it remind you of tips and tricks you've learned about gardening or ginger or sauerkraut that you could share? Please leave a comment below 🙂