2 Ways to Preserve Leafy Greens From Your Veggie Garden 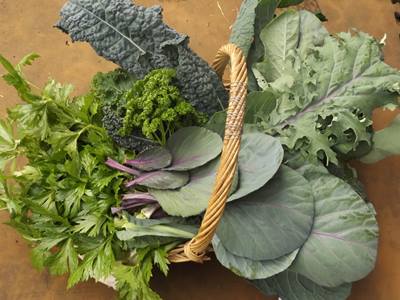 2 Ways to Preserve Leafy Greens From Your Veggie Garden

In my experience, leafy greens are among the easiest kinds of veggies to grow. But they don't keep for very long and after you've given basketfuls of them to your friends and eaten stir-fried leafy greens, leafy greens in soups, in stews, and added to salads, and they're still coming, what do you do with them next?

Below is a basket of produce from our modular veggie garden. I've lost count of how many of these I've brought to the kitchen or given as return gifts to friends in exchange for music lessons, fruit, preserves, and general good-will. 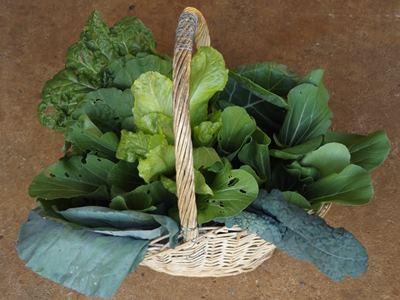 But lately I'm finding that I even have more green leaves than I can reasonably give away. Here are two ideas for preserving leafy greens when this happens to you. The first is a bit of an experiment. The second is a tried and true favorite in my kitchen.

The experiment: can you make sauerkraut with green cabbages that haven't formed heads? 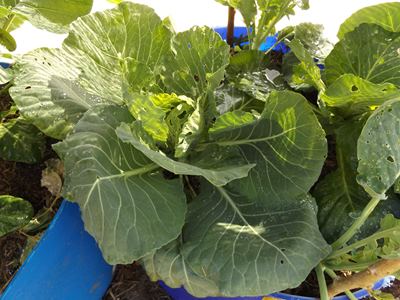 There are quite a number of cabbages like this one in the garden that haven't had time to form heads yet and are starting to get a bit chewed by caterpillars. We've been eating the outer leaves from them for a while but yesterday I decided to harvest some whole cabbages and use them to make 'kraut, even though they haven't headed yet.

So, can you make sauerkraut with dark green leaves from cabbages that haven't formed a head? I've never tried, so I don't know.

I decided to hedge my bets by making 'kraut with a mixture made from one round, white shop cabbage, and two open, dark green, garden cabbages.

I forgot to take pics before I cut them up, but here they are chopped and mixed with some ginger and plenty of salt, before they went into the jars... 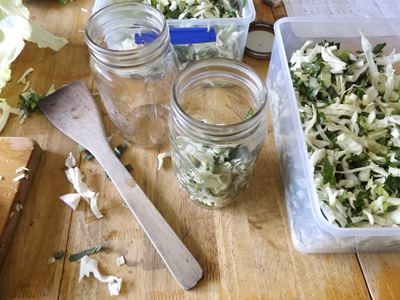 Pounding the first handful of salted cabbage leaves into the jar (below). I used to pound them first in the tub to release the juice which forms the brine in which they'll ferment, and then pack them in the jars, and then pound them again to get them packed in tightly.

But I've found it works just as well to chop, mix with salt and ginger (the ginger is optional), then pack into the jar in thin layers and pound each layer down. 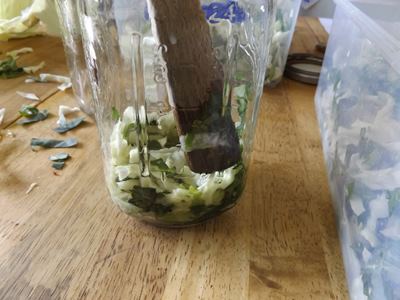 The pounding packs the jar tightly and releases the juice, and this time the juice is green! 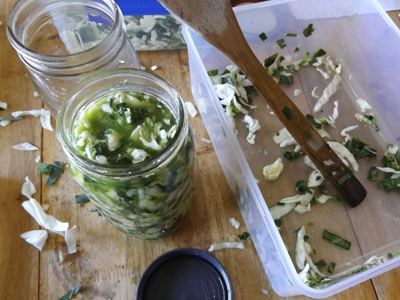 There's a green cabbage leaf or two packed into the top of each mixture (below) to hold the 'kraut down below the level of the brine in the jar.

They're sitting in tubs because the mixture will expand and the jar on the right will leak for sure. I don't know if the two on the left will. In about 7 to 14 days time, when they taste right, we'll put them in the fridge. I'll update this post to let you know how they went. 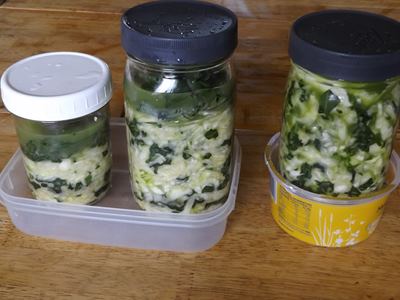 Well, so that was a good experiment, but it didn't use up much volume of produce.

The next technique will reduce a whole fridge-full of bags of dark green leaves into a small, well behaved tub of highly nutritious crumbles that will keep for weeks on a shelf, and months in the fridge or freezer.

This is my favorite way to preserve all the dark green leafies. It reduces a mountain of greens to a very, very small pile of ordinary looking dry brownish-green crumbs.

But don't be fooled. This ordinary little pile of crumbs still holds all the nutrition that the fresh leaves held (and it's a pretty spectacular amount of nutrition; see here and here) but now in a tiny, tiny fraction of the space.

It's super satisfying to be able to lift the nutritional profile of a pot of, say, savory mince, soup, or strew, simply by mixing in a handful of crumbled dry greens.

So. In the image below I've started stripping the thick stems out of the leaves and arranging them on dehydrator trays. 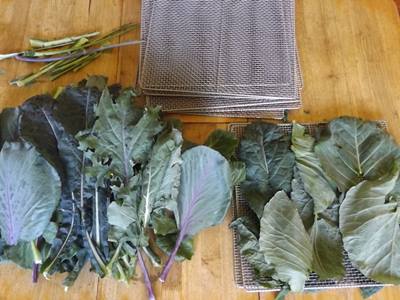 Below: a pile of stems for the compost bin and a pile of trays with leaves arranged on them, mostly in a single layer but with some overlap. In the dehydrator. It can be a bit fiddly pushing the trays in without the leaves catching and moving. 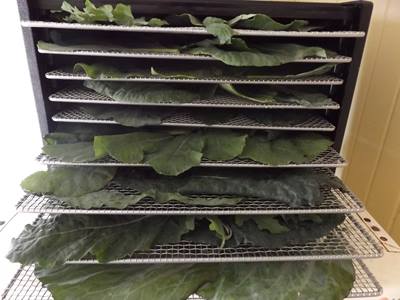 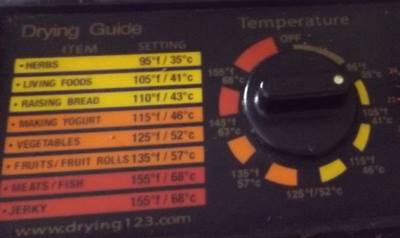 After about 5 hours of drying time there's been substantial shrinkage. 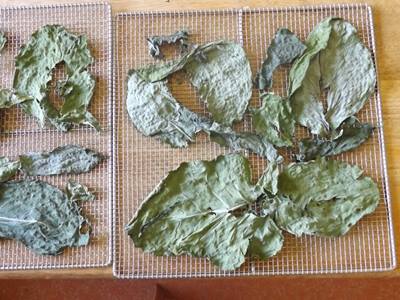 I saved some in a tub without crumbling them. They make an interesting snack when eaten from a bowl with a fork, drizzled with olive oil (you could add crushed garlic) and salt.

I forgot to get a pic of the volume of leaves I started with, but it was about 4 bags this size, brim full. 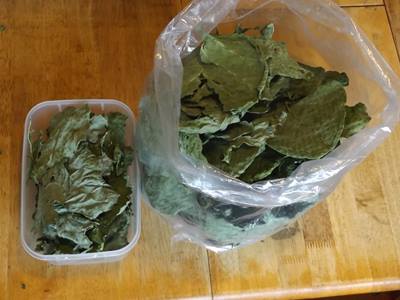 When the ones in the bag have been crushed/crumbled, the volume reduces even more drastically. 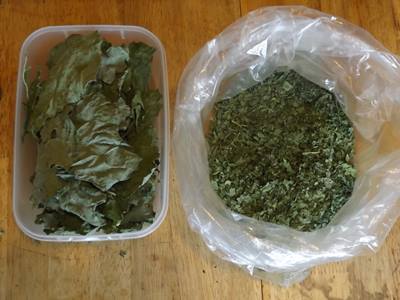 To the left, below, is a few bits of leaf that didn't dry fully (they would have been overlapped too much) and therefore didn't crumble. Very easy to pick out after the crumbling. To the right is a little pile of bits of stem that got missed when I was stripping stems out of the leaves. 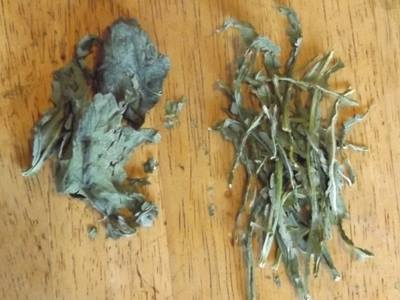 So there you have it. Super nutrition, homegrown, with all the prep work already done. A great way to use up those leafy green excesses, and an easy way to get a dose of them into the pot quickly and effortlessly at meal making time. 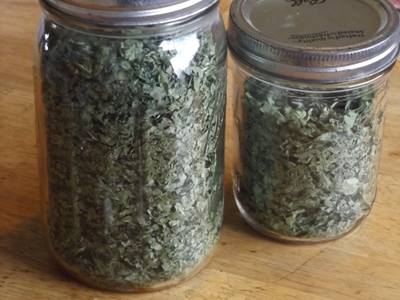 They should, in theory, keep on the shelf, but I like to keep mine in the fridge because in our humid climate I want to be doubly sure I won't lose my hard work to mold.

In case you missed them, here are three other posts about the garden that these greens came from:

Have you tried drying leafy greens? How do you use them? Please share...