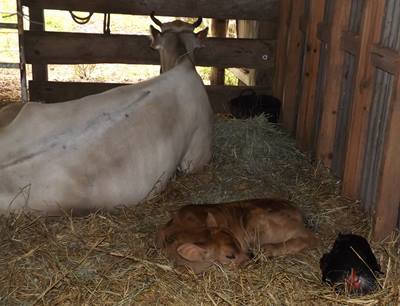 about a 4 minute read, lots of pics

The kids'll soon be up and looking for breakfast. The cow needs milking and the calf pen needs cleaning. I just have time before all that starts, to show you some pics of the new calf, our recent veggie garden harvests, and the chickweed in the lawn that we're putting into salads.

Last week, the moon was dark. The "Dark Moon," (the three days, approximately, in the lunar cycle where we can't see the moon at all) holds the ending of the previous lunar cycle and the beginning of the next one (the New Moon). It's a potent time, because it's full of the unraveling of endings AND the potential and promise of new beginnings.

Now, a week later, the moon is waxing, its spring on the wheel of the year in the Southern Hemisphere, and all kinds of beginnings are budding on our farm. The biggest one (in physical size and also in terms of the workload it brings) is a new calf.

Her name is Lucy. Here she is, less than one day old, sleeping beside Emma. 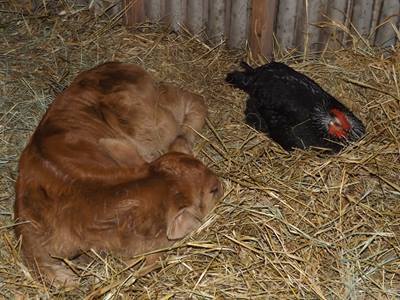 Emma lives in the big animal shed, and she used to lay her eggs just where we made the calf pen. She doesn't see any reason to move her nest just because there's a calf pen there now.

Emma also doesn't see any reason not to help herself to  the scrap bucket before it goes into the big chook shed for the other chooks. That's the egg basket beside her, waiting to be filled when the scrap bucket is emptied. 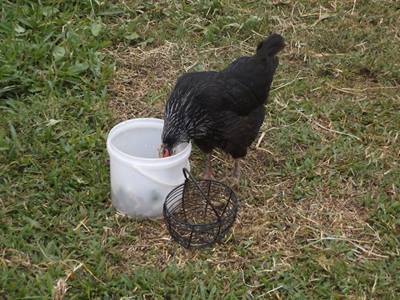 .... and Lucy is hiding (which new calves do, very effectively) on the other side of the veggie row, under the choko vine. That's it on the home dairying front for now. Next, some pics relating to our modular veggie garden project.

Still working on using up those leafy greens

I know -- this doesn't look very appetizing. (It's lucky I have no ambitions to be a food photographer.) The point, is that I'm happy to have discovered a new way to use up dried powdered kale and other brassica leaves. Alain made guacamole recently after a friend gave us too many avocados, and I discovered I like it with cream cheese and powdered kale added in. (Alain ate some too, to humor me, but nobody else was really that interested.) 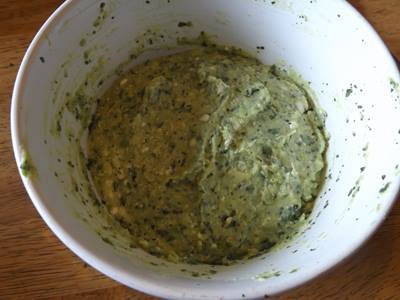 At long last I'm also bringing other things than just leafy greens into the kitchen from our blue barrel project. (Yes, that's our general house-hold muddle in the background. Sometimes a muddy muddle.) The broccoli heads are small and I'm usually late seeing them so they've started going a bit yellow-ish. But for a while there I was afraid that all we were going to get would be broccoli leafy greens.

The cabbages are still small and a bit caterpillar-munched, but they're forming heads. And since this has been my first ever cabbage attempt, I'm happy. 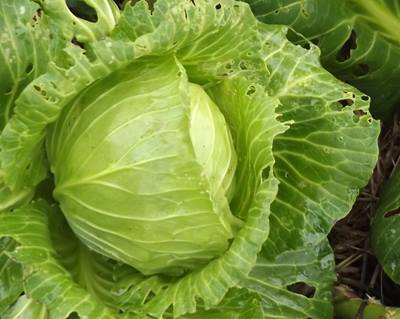 And maybe we'll even get some cauliflowers. This is my second cauliflower growing attempt and since the first one was mostly a fluke, I'm relieved to finally see these little heads starting to form. 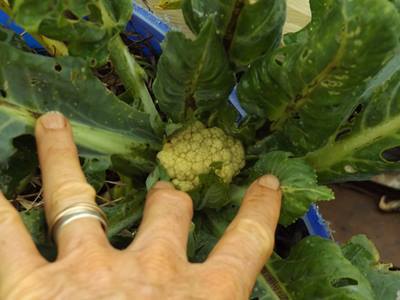 We love fennel chopped fine into salads. Celery sticks are good in packed lunches. I missed that lettuce and it started to go to seed (come to think of it, maybe I should have let it, so I could collect some seed). And at the bottom of this pic you can see chickweed and basil to go with the lettuce and fennel for an evening salad. Speaking of chickweed, a great place to get it if your climate is moist like ours is from your lawn. I took two complete salads from our lawn this weekend, and there will be more (until Alain mows). 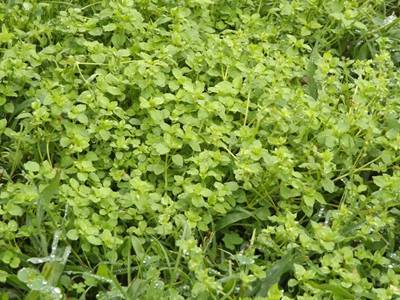 Here's how I harvest fennel, because I've found that very often after cutting out the bulb and leaving the tiny side shoots like this... 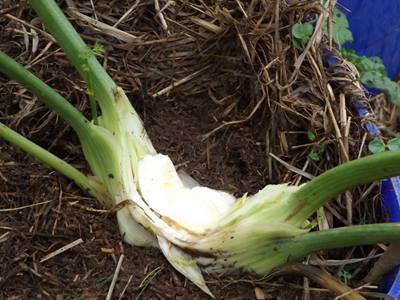 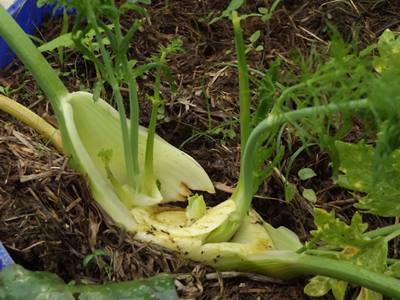 ... and after a bit longer this happens, until gradually lots more fennel bulbs form. Much more fun than having to plant a whole new seedling. Ok, enough. I haven't done my journal yet. At least one of the posts I linked to above needs its images  replaced because there was recently an image gremlin in my website. The kids will be up soon and looking for breakfast. The cow needs milking. The calf pen needs cleaning out. And that's just the early morning stuff!

Please, would you leave a comment below and tell me what this post brought to mind for you?