Beyond Eggs – Pros and Cons of Free Range and Mobile Pens

​​​BEYOND EGGS:
Pros and Cons of Free Range and Mobile Pens ​

​Approximately a ​7 to 8 minute read | Part 1 of ​a Series | Also published at Permaculture.Org

But poorly managed chickens tend to focus all their talents and energy into very destructive pursuits, as you know if you’ve had your seedlings repeatedly dug up or your fruit trees efficiently de-mulched.

​How ​can we harness all that chickens have to offer, in ways that keep everybody happy, healthy and productive?

Design and management for maximum integration

​​​​​​What makes a Permaculture system work is the relationships ​within it.

A flock of chickens is an example of an element in a Permaculture system, and it can potentially have relationships with many other elements in the system that it supports/is supported by.

Anybody can ​stick a flock of chickens in a backyard. But ​if you were approaching it from a Permaculture perspective (a holistic perspective) you'd consider how to locate and manage the flock well so that all of the outputs it produces, or functions it can perform, are put to good use.

Healthy ecosystems teem with diversity, each life-form inter-connected with all the others in a complex web that would be weakened and compromised if just one strand were removed. This is what we are striving to emulate.

It’s the interactions, exchanges, and synergy between the components of the system that provide the stability, adaptability, flexibility, efficiency, productivity/abundance, and beauty that we find lacking in a monoculture or in a less integrated system.

With this concept in mind, here are:

​​​​​The​ need to fence ​them in placed our feet on a path toward better management of our chickens.

When we got our first chickens, we weren’t thinking about design or management. We just wanted to see chickens scratching in our backyard and let the kids collect fresh eggs for breakfast.

It was what I would call “true free range.” So much space that the chickens could never run out of foliage and bugs to forage for, and not enough chickens for their manure to become unmanageable in any of the spaces where they spent time.

At this time, we had a very small veggie patch. It was heavily fenced to keep out deer and rodents, so keeping chickens out of it was a non-issue. We also had no near neighbors – so other than the issue of predation, there was no reason to fence the chickens in.

Predation, however, turned out to a very good reason for limiting our chickens’ range. It wasn’t long before coyotes ate four of our five chickens.

Clearly our chickens were not very well integrated into their surroundings. Their function as prey for the coyotes far outweighed any other function, and it was a one-way deal rather than a mutually beneficial exchange.

We named the surviving hen James Bond, got four more, and fenced the back yard.

So now they were no longer free range. If we wanted them to have greens and bugs to eat, we had to import them. And if we wanted to make good use of their manure and keep their living areas clean for them, we had to collect the manure and move it somewhere else.

Which, for such a small flock, wasn’t too hard to do. And although we didn’t recognize it at the time, the requirement to fence them in placed our feet on a path toward ​more thoughtful and deliberate management of our chickens. 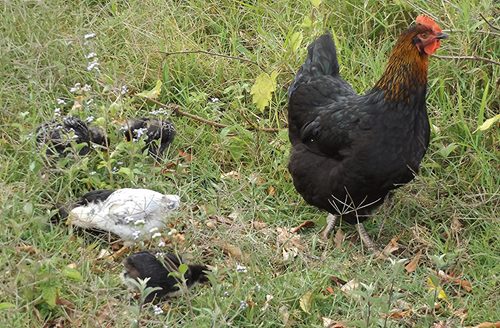 A free-range hen and chicks, out foraging

If you have a small enough number of chickens and a large enough space for it to be honestly called “free range,” these are the free-range pros I can think of: 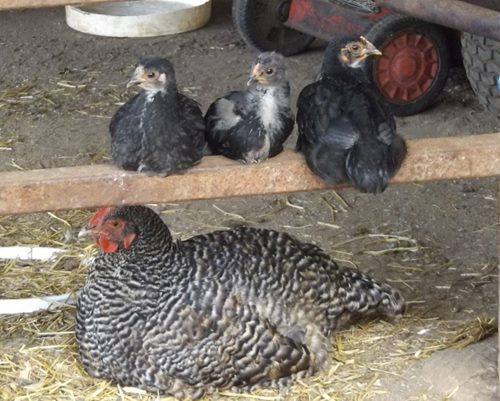 ​A free-range hen resting with her chicks – and depositing their poop in an area where its not wanted.

A few years later, ​and after a few other chicken-keeping scenarios, we decided that mobile pens would be the way to go.

We bought two rolls of portable white electrifiable chicken netting, enabling us to fence our chickens into moveable areas of endlessly variable sizes and shapes. (The mesh works to keep the chickens in and to keep predators out. In our experience, it’s very effective for both purposes.) 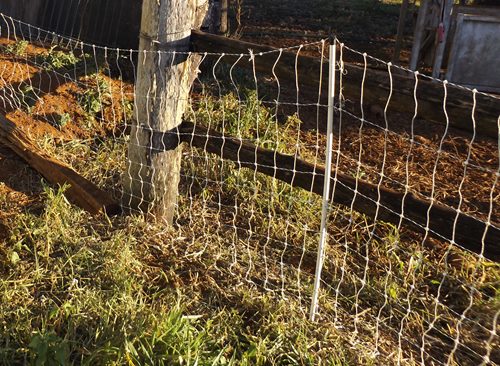 At ​this time, we were back in Australia and renting a property where the large chicken coop had a veggie garden area on one side of it, a relatively flat, open pasture area on the other side, and a large banana patch behind it.

​A hen and chicks resting near the mobile chicken mesh

Our mobile mesh fencing worked well on this property.

When we wanted to allow the chickens to clean up some veggie garden beds, we fenced those beds off from the others and let the chickens in. This enabled them to perform valuable services of debugging, de-weeding, and manuring, while reducing our feed bill and producing better quality eggs.

We didn’t have enough beds or a well-enough managed system to provide the chickens with garden beds to work on all the time, but it didn’t matter too much. When there was no garden work for them, we put the mesh around the outside of the banana patch, or on the flat pasture, and gave the chickens access to one of those areas for their daytime foraging.

Ample ​easy-to-fence, chicken-friendly habitat made up for our ​sloppy management.

Of particular interest, I later realized, was the health and vitality of the banana patch behind the ​chicken pen. It was healthy, because it was fed by the chicken coop which was above it on a slight slope.

Whether someone had planned it that way or not I don’t know, but it was an example of an effective loop, or relationship, between two elements in our system.

Banana patch contribution to chickens: shelter, shade, and lots of old, decaying banana trunks on the ground among which to scratch for worms and insects.

Besides the banana patch, the other interesting feature of this chicken coop was that the entire coop had an earth floor and there was deep, fertile soil underneath the roosting area (into which the banana roots were reaching). This gave us a clue for what we would later decide was our ideal chicken housing arrangement.

But first, the mobile pen pros and cons.

Coming up in Part 2, I'll ​explain why we've decided to try confining our chickens in a large deep litter run.

I’ll share what we’ve found to be the pros and cons of deep litter, and why we’re optimistic that this arrangement will push us into much better chicken management and a healthier, better integrated farm ecosystem. 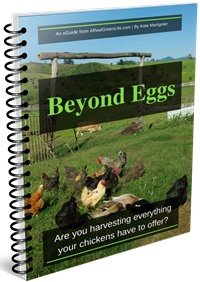 ​Right now, this Series has two more posts ​already written.
There will be more to come ​as time goes by.

Download the Series ​and receive a link to the updated version whenever I add ​to it.