An Introduction to Sweet, Crunchy Yacon 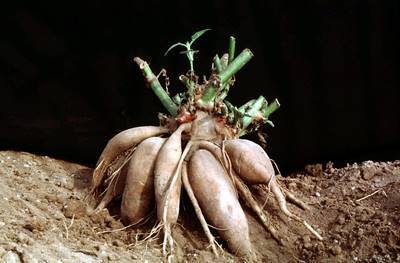 An Introduction to Sweet, Crunchy Yacon

About a 4-minute read

It's yacon planting time in the Southern Hemisphere tropics and semi-tropics. Yacon tubers are sweet, crunchy, and delicious raw or cooked, and are a firm favorite in our family. This post is a quick introduction to yacon and my experiences with growing and eating it.

Yacon (Smallanthus sonchifolius) produces two types of underground yield. In the picture at the top of this post the planting rhizomes (see below) have been twisted off and we see just the large, edible tubers that look a bit like sweet potatoes.

In the picture below, I've twisted off the edible tubers to show just the second type of yield — the purple-ish/reddish rhizomes waiting to be divided for planting. The rhizomes sit above the tubers, directly at the base of the stem. They can be eaten when young but if you did that you'd be eating your propagation material — this is what the new yacon plants are going to grow from. 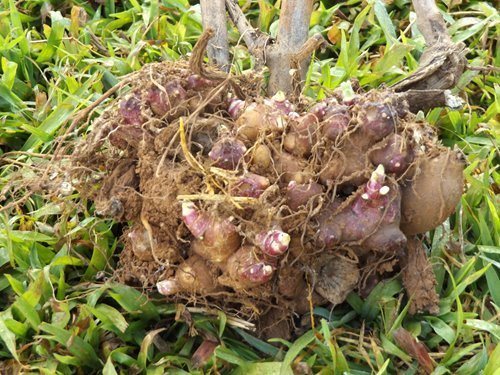 Yacon is not the tidiest plant. As you can see in the pictures below, it can get leggy and sprawling, its flowers are small and not noticeable, and its foliage can be messy. 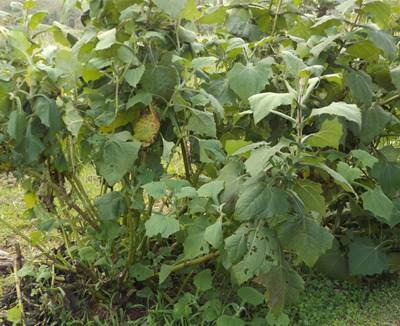 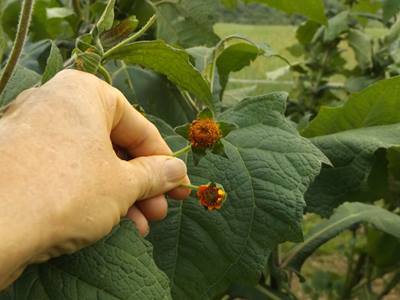 Here's a closer pic of the foliage... 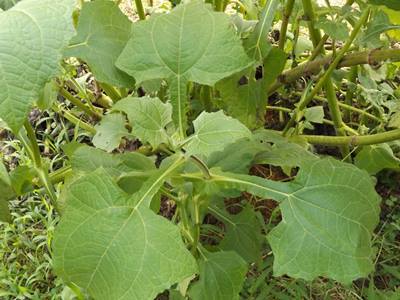 When I was first learning about yacon, some writers said its foliage was an appealing fodder for goats and pigs, but this has not been my experience (I am sure goats and pigs would love the tubers, but I've never had any spare).

I believe you can make a medicinal tea with the leaves, but I haven't tried this.

I also haven't found yacon foliage to be very useful mulch provider, as its foliage loses its bulk very quickly and just sort of dissolves after a short time on the ground.

But, yacon is very good to eat.

To harvest all of it at once for eating, dig carefully around and under and lift the whole plant to find the large, smooth brown tubers, after the plant has flowered and then died back at the end of summer.

One way to know there are tubers under there is if you can see the soil mounding up around the base of the plant. Sometimes you can see them protruding a bit, but that probably means your mulch layer isn't thick enough.

Or you can do what I tend to do, which is to dig carefully under one side of the plant till you find a tuber, clear around it and twist it off, then refill the hole you've made with soil/compost, replace the mulch, and go have dinner.

To prepare it for eating, peel the tuber thickly to remove the smooth outer brown skin and the inner white skin and reveal the pale, translucent, sweet, crunchy flesh. Put it in water as you peel it, to stop it going brown.

Eat it immediately, in large quantities, like my son does, or chop it into salads or put it in stir fries or stews. No matter what you do to it or how long you cook it (within reason), it doesn't lose its crunch and its sweetness.

My kids prefer it raw; I like it cooked. To me, raw it can taste a bit flat and watery (it's definitely a thirst quencher when eaten raw) and cooking it intensifies the flavor a bit so it has more body to it.

Eating large quantities of raw yakon may lead to some harmless but entertaining flatulence (which is part of its appeal for my son); this is no longer a problem after its cooked.

You saw the clump of rhizomes in the picture above; below, that clump has been divided ready for planting. 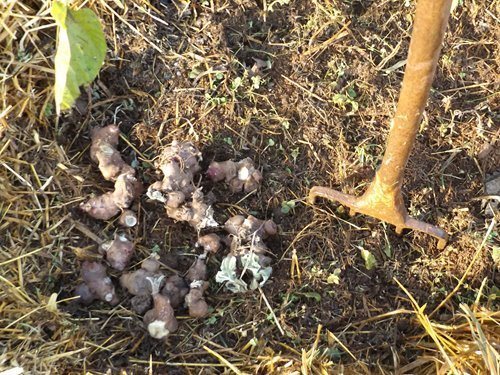 Those little bits of rhizome will all sprout leaves from their little knobs, which will look like this... 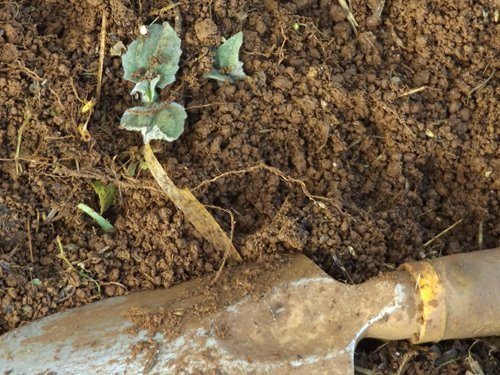 GreenHarvest.com.au has a useful profile with lots more details and better pictures of yacon, as well as more growing information.

And here at RainTree.com is a comprehensive article about yacon's origins and its herbal properties and actions, and other uses for it besides just eating the tubers.

Some other bits and pieces I've learned about yacon:

Do you have yacon growing in your garden? Has this inspired you to get some and try it?