Loofah – Grow Your Own Sponges 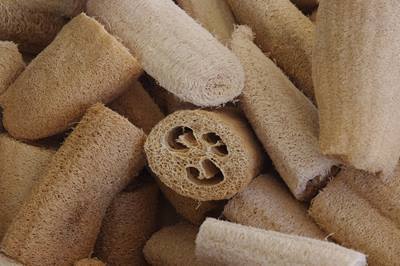 Loofah - Grow Your Own Sponges

About a 4-minute read

Loofahs are easy to grow. You can eat them when they're small, and if you let them get big they make great bathroom sponges. They also make pretty good kitchen sponges. Best of all, when they wear out you can compost them to feed next year’s loofahs.

Besides being yacon-planting time in the Southern Hemisphere tropics and semi-tropics, which I wrote about last week, it's also loofah-planting time.

Don't be intimidated — the loofahs in the image above are easy to grow, easy to clean and remove the seeds from, and make great bathroom loofahs and great gifts to other lovers of all things natural.

They also make pretty good kitchen sponges. They're not as abrasive as the scrubbing sponges in the supermarket, but they're definitely adequate for anything you would do with a soft sponge. And best of all, when they wear out you can compost them to feed next years loofahs.

The image below shows some of our last harvest of loofahs still waiting to be peeled, have the seeds shaken out of them, and be put to use. (Once they're really dry like this and the skin has started to break open, the seeds start falling out which is why these are in a tub - to catch the seeds.) 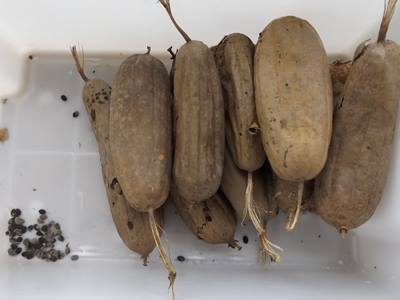 Here (below) is what a loofah looks like when it has reached full size but has not yet started to change color and dry out. Right now, this loofah would be heavy and feel solid. As it continues to age, it will gradually turn yellow, then brown, and as it changes color it will feel gradually lighter and spongier, and finally dry with a crackly skin. 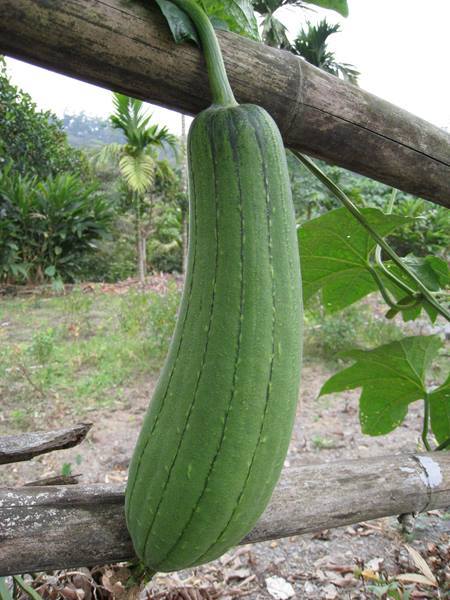 And here (below) is a pic of loofahs growing together with snake beans. The yellow flower is a loofah flower. The leaves, flowers, and early fruit of a loofah vine look a lot like cucumber vines. (Those are mostly bean leaves you can see in this pic; I don't have a good image of a loofah vine and since ours haven't gotten going for this year yet, I don't have any to photograph at the moment. But I'll link to resources with lots of pics, down the bottom of this post.) 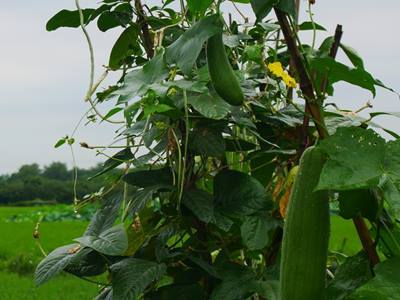 How to harvest and process your loofahs

If you have dry enough weather, you can leave your mature loofahs on the vine until they're completely dry and crispy. As they go from green to yellow to brown, the fibrous "skeleton" becomes increasingly tough and rigid and the flesh disappears like magic. The loofah gets lighter as it dries, and the skin begins to separate from the fiber inside.

If you live in a wet climate, as we do, you'll need to watch your loofahs closely. It's a balancing act because if you harvest them too early while they're still fleshy, they may rot rather than drying out, and if you leave them on the vine in continuous wet weather they develop mold spots and you end up having to cut away parts of your loofah. Showers, with patches of sunny weather in between, are okay.

If your loofahs are dry and crispy, its easy to crack the skin off them, shake the seeds out of them, and wash them under running water. Dry them for a final time before use (in the sun is best) and, Tadah! Home grown bathroom and kitchen sponges.

If it's too wet to let them dry fully on the vine, pick them as soon as they have begun to turn yellow and get a little lighter. If you do this, process them right away even though they are still very fleshy. Peel the skin off and remove the flesh by rubbing and squeezing in a tub of water or under running water. You can experiment with strong jets of water, too. The seeds will squeeze out along with the flesh.

Once all the flesh is washed away, the loofah will dry without the risk of rotting. This one will be softer than one that had time to dry fully on the vine and may not last as long, but it will still be great for using on your skin.

After washing and before drying for use, some folks bleach their loofahs to make them nice and white, but I don't bother with that.

Keep the fuits that appear earliest, on the vine to use as loofahs. But fruits that appear after midway through the growing season and won't have enough time to mature can be harvested while they're still small and eaten like zucchini. The young shoots, flowers, and leaves can all be eaten too, raw or cooked.

Loofah names and where to get seeds (AU and USA)

The variety of loofah we have is Luffa aegyptiaca, sometimes also called smooth luffa, Egyptian luffa, dishrag gourd, gourd loofah. Its alternative scientific name is Luffa cylindrica. An Australian source of seeds is here (scroll down though the "L's" untill you get to luffa).

Another variety is Luffa acutangula, commonly called angled luffa, ridged luffa, vegetable gourd, Okra Vine, Okra Cee Gwa. This one is sold as a vegetable which is a good substitute for zucchini in humid areas (where zucchinni often succumbs to fungal problems) by GreenHarvest.com.au. But you can also let the fruits of this vine mature and use them in exactly the same way as Luffa aegyptiaca.

A USA source of loofah seeds is here.

Growing tips and a video showing the cleaning process

A great video all about growing and processing loofahs can be found at the bottom of this article.

(I think in this article they may have switched the names/descriptions of  Luffa aegyptiaca and Luffa cylindrica around, but since the two can be used interchangeably it doesn't matter. Just be clear that the plant shown growing in the video is  Luffa aegyptiaca).