On Making the Least Change
for the Greatest Effect

Part 8 of a Series: "When Nothing You Can Do Makes a Difference"

​In our make-it-happen story of rugged, heroic individualism, "goal achievement" means grunting and sweating, burning the candle at both ends, making herculean efforts.

Not only is this approach unsustainable, but also it keeps us in battle mode. It fits the story of a culture in which drama and conflict are a way of life.

To sustain positive change toward a gentler, more life-affirming story, we can use small, consistent habits, adding up over time to something significant ​— ​the same way that ​silent, imperceptible growth ​develops a seedling to a sapling, a tree, and finally a towering forest giant.

​Recently in this article series we’ve been talking about goals and about the consistent, repetitive habits necessary to get to them.

In this article, we’re going to ​take a look at keeping both the number of goals and the size of the habits small, so you can stick with them long enough to be effective.

There’s a Permaculture principle that’s been stated as “Use small and slow solutions,” or, “Make the least possible change for the greatest possible effect.” That’s the principle we’re invoking here.

​​Find the 'leverage points' in the system and intervene there, where the least work accomplishes the most change.” ​

We’re going to approach this from two angles.

Firstly, we’re going to talk about focusing on a smaller number of goals, and while we’re at it we’re going to consider ​whether there may be ONE goal that has more potential than any other to nudge lots of other things along in the right direction with it. This would be the “leverage point” that Toby mentioned in the quote above. I would call it a “lynch-pin goal.”

Secondly, we’ll take a look at breaking down the habits you need to establish in order to get to your goal/s until they are so small, they are truly painless.

S​elect a small number of goals

A trap in goal setting (and also in writing to-do lists) is that the act of brainstorming what we want to achieve yields too large a list. Overwhelm is the inevitable result.

James Clear shares the story of “Warren Buffet’s 2-List Strategy” in which you write down a long list of goals, select the top few that are most important to you, and then avoid the rest at all costs until after you have the top ones handled.

​The idea is that while it’s (relatively) easy to avoid things that you know are a waste of time, the goals or items that Buffet would say you need to put on your “avoid at all costs” list are important enough to you that you’re likely to be tempted to try to do them all at once – with the end result that you do none of them well.

I think that approaching this from a Permaculture mindset provides another distinction we can add on to Warren Buffet’s advice above.

In Permaculture, we know that we need the elements in our systems to perform as many functions as possible.

Beneficial connections between components help create a stable whole; it's the connections and interactions among elements​, ​more than the individual elements themselves, that create diversity, abundance, and resilience in a system.

It’s ​similar with goal setting. Several unrelated or uncomplimentary goals is as likely to drain your energy with little to show for it, as simply too many goals.

Can you identify a “lynch-pin goal”?

The closer your goal is to the center of the Circles Diagram at the beginning of Part 3, the more likely it will act as a “lynch-pin goal” – a goal that can positively impact many areas of your life at once. 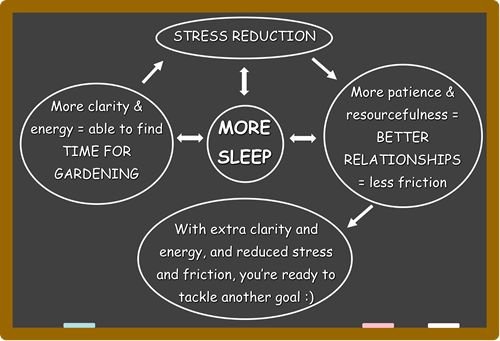 In the diagram, the goal to get more sleep results in a flow of positive benefits to and from other areas of your life.

Goals that may have been eluding you (for example, growing more food in your garden, stress reduction, improving a difficult relationship) become more do-able as the lynchpin goal—the one most able to support the others—comes to fruition.

In turn, these now more do-able goals may also feed back into your lynchpin goal in a mutually beneficial way. Time in the garden, reduced stress, and improved relationships, are all likely to support better quality sleep.

​Design small habits; maybe much smaller than you think

So far in this Series you’ve identified where to focus your energy (Parts Three and Four). You’ve made sure that “urgent” is not overriding “important” (Part Five). You’ve connected your goal to other areas of your life (above) and you’ve identified habits or activities that can help you build toward more than one goal at a time (Part Six). You know how to set up triggers and props to remind you of the habits you need to sustain in order to bring about your goals (Part Seven).

There’s just one more thing we need to talk about before we move on from goals and habits: make the habits SMALL.

Nothing worthwhile is achieved overnight. ​Many worthwhile goals are not end points, but ongoing journeys; ​for these, the habits you need to develop will ​become lifelong habits.  So​ it makes sense to take time to design these habits to be a sustainable, painless part of your life.

In the next two sections I’ll share ​examples of keeping things small enough to keep them achievable.

The three-minute tidy up

Tidiness can make a lot of other things go better: a cluttered space drains energy and moral; a tidy space invites creativity and productivity.

But I hate housework and have never been good at maintaining a habit of tidiness myself (let alone helping my kids develop one).

Recently, I stumbled on a game that I plan to make into a recurring family habit that will banish untidiness from our house forever. Hopefully. It’s a game called “the three-minute tidy up.” Here’s how ​we play it.

First, we take a photo of a very messy area.

Then the players line up on a starting line, we set a timer for three minutes, and we start tidying up, fast as we can, till the timer goes off.

The most important part is that when the timer goes off, everybody has to stop. Nobody is allowed to tidy up for more than three minutes.

Then, we take another photo and look at the difference. The kids and I love this game because the effort is short and small, the fun quota is high, we can clearly see what we’ve achieved at the end of the game, and we know when we start it that we’ll be back to whatever else we want to be doing very quickly.

Developing a reading habit when you have no time to read

Reading1 is “small and slow” – your life doesn’t change overnight because you become a reader. But cumulatively over months and years, the difference a consistent reading habit can make in your life can be profound.

Here’s an example of how you might go about developing a reading habit when you have no time to read.

Place your book above the water filter in the kitchen. When you need a drink of water, stand still and read one page while you’re drinking. Or, put the book in the bathroom, where you’ll see it when you reach for your tooth brush. Read a page while you’re brushing your teeth.

The book itself is your prop; its presence where you cannot help but see it as you reach for a glass of water or your toothbrush is your trigger. (We talked about props and triggers in Part Seven.)

Your decision to read only one page at a time – an amount you can manage without taking any time out of your existing routine – keeps it small enough to be sustainable.

One page at a time while you clean your teeth won’t get your book read super-fast, but it will get it read. And it’s a lot better than reading an entire chapter in one sitting, then having a month go by before you remember to pick the book up again – by which time you’ve forgotten what the first chapter said and you have to start over. 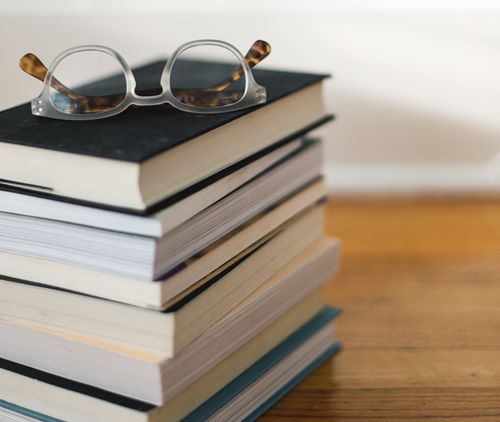 How small is small enough?

Small enough habits or actions are so small that they are easy to take, easy to repeat, and you don’t feel huge resistance to doing them.

Once your goals are identified, your small, regular habits decided on, and your triggers and props in place, you should find yourself moving in the right direction almost by default.

This can be hard to fathom, in our make-it-happen story of rugged, heroic individualism.  Surely, if we’re not grunting and sweating, burning the candle at both ends, making herculean efforts, then nothing is happening, right?

The trouble with herculean efforts to make things happen, besides the fact that they’re only sustainable in very short bursts, is that they keep us in battle mode. They fit the story of a culture in which drama and conflict are accepted parts of life.

To sustain positive change toward a different kind of story, what works well is small, apparently insignificant actions, deliberately chosen to be comfortable and free of conflict, carried out consistently. No fanfare or drama required.

We’ve covered a lot of ground in this series. You may be wondering what all this stuff about establishing and maintaining useful habits has to do with making a difference to things outside your own private life … stay with me, because I’m getting to that in Parts Nine and Ten – the final parts in this Series.

​Have you had success with "small and slow" solutions?

​Have you put this principle to work in any area of your life, or do you see a way you could, after reading this post?