Raising Pigs – Mobile Pens vs Pigs in One Place

​Part 1 of a Series | 5 to 6 minute read | Also published at PermacultureNews.org

Assuming you want your pigs to be able to enjoy natural behaviors like digging in living soil, foraging for fresh foods, and wallowing, do they need to be moved frequently onto fresh ground?

Strategies for housing and feeding pigs vary according to circumstances, and in particular will depend on whether you keep your pigs in one place and can build permanent structures for them, or you want to move them around and need mobile infrastructure.

​We’ve tried both – moving pigs around and keeping them in one place. This article shares what we have (so far) found to be the pros and cons of mobile versus stationary pig raising systems, and why we are currently trailing a stationary arrangement for our pigs.

Our pig-raising beginnings – moving pigs on pasture with cattle

We didn’t plan to raise pigs. We moved onto a rental property where the previous tenant had left pigs behind. He was coming back to get them, but the removal date kept shifting, and in the meantime, we were taking care of them. May as well learn to do it well.

We had read Allan Savory’s Holistic Management and some of Joel Salatin’s books about regenerative farming using electric fencing. Accordingly, we were moving our small herd of beef cattle regularly, and we decided to try adding the pigs into the same grazing rotation.

We used electric fence with a low strand nose-high to a pig, and a higher strand for the cattle, and moved them as a mixed herd, together, using food that cattle like in one bucket and food that pigs like in another bucket to lead them to each new area.

It worked okay, but it was labor intensive and time-consuming to make the move often enough to keep the pigs from doing too much digging in one place.

Each move involved shifting the low-and-high fence, the pigs’ shelter (an upside-down rainwater tank), and the pigs’ feed and water troughs. The low strand of the fence was always impeded by tall, thick weeds and grass that had to be whipper snipped out of the way for each move.

It grew tedious, and although we have no objection to hard work, in our opinion keeping animals should be more enjoyable than tedious.

So, for our next few batches of pigs we kept them in their own, smaller pens, separate from the cattle, and moved them less often but still frequently enough to keep them on fresh ground.

Arriving at the decision to try a stationary arrangement

Next, we moved to a new property where we experimented with using pigs to help establish new gardens, food forest, and fodder forest. 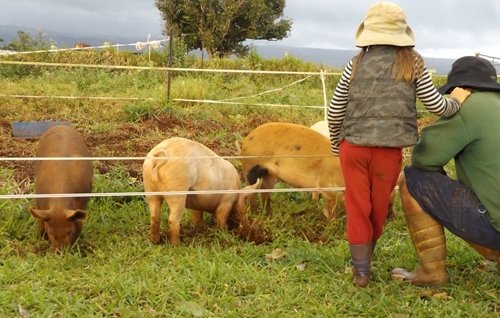 But as those became established and we had less new projects for the pigs to work on, we ran out of new places to put them. And we found that returning the pigs to places they had been before required a lot of space to rotate them through, in order to give each area time to recover.

We have a very wet climate, so we also found it difficult to provide the pigs with a shelter that was adequate for their needs but still moveable.

We tried an upside-down rainwater tank with a door cut in the side, but the rainwater ran underneath it.

We tried a laneway system giving access back to a shed from each pen, but the laneway became an unpleasant quagmire. And the space we could use adjacent to the shed was limited which resulted in increasingly barren, lifeless pens that didn’t have time to rejuvenate before the pigs were rotated through them again.

At this point if we list our pros and cons for mobile versus stationary pigs, a stationary arrangement is looking relative attractive...

Pros and cons of mobile pigs, versus stationary ones

The big, obvious advantage of mobile pig pens is that you can make use of the pigs’ natural behaviors to change their environment, assuming that you have areas you want them to change and that they change them in the right direction.

We’ve had this work both ways for us. One of the places we have put pigs was a gully that was infested with lantana. They killed the lantana very effectively, and in its place a lovely body of grass grew. Success.

On other occasions we’ve put pigs in grassy areas which they have dug over rapidly and enthusiastically, and weeds have replaced the grass, leaving a lumpy, weedy mess where previously there was level pasture. Not so successful.

For us, whether pigs do damage or do good work seems to depend partly on the weather. When its dry, life is easier, but in our extended wet periods the pigs make a muddy, compacted mess faster than we can move them on.

In our circumstances there are lots of advantages to keeping pigs in one place:

And of course, there is one big disadvantage to keeping pigs in one place, which is that the ground that the pigs trample on, dig up, or wallow in, is the only ground they have.

From the pigs' point of view, the nice thing about being mobile is that when an area becomes stale, muddied, and manured, they can move onto a fresh, clean area. 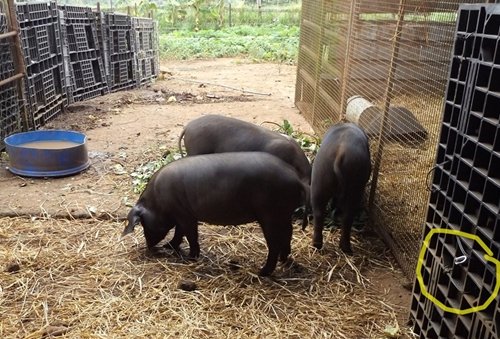 ​​Raising pigs in one place allows us to provide a dry sleeping area and access outdoors. The yellow circle indicates a nipple for clean drinking water; the blue tub is for blowing bubbles in.

Keeping pigs and land healthy, without moving the pigs

Recently we set ourselves the challenge of figuring out if—and how—pigs and their environment can be kept happy and healthy without moving the pigs.

Some aspects of this—clean, dry shelter, clean drinking water, and easier-to-maintain-fencing—are already working so much better than our previous mobile arrangements that we are feeling very encouraged. (I’ll talk about some of those in upcoming parts of this Series.)

Other aspects—keeping their outdoor area fresh, providing living soil to dig in, and managing their manure—are still in development.

Our ideas for solving the puzzle include island plantings of food and shade producing plants within the pigs’ outdoor area, scratching chickens to spread manure, and compost piles to dig in.

​​When we've had time to trial these ideas, I'll add more posts to this Series that will share our outcomes with you.

Now that we’ve looked at the question of whether we’re moving the pigs around or keeping them in one place, next up I’ll share some of the things we’ve learned about getting started when you bring your new piglets home. That's coming up in Part 2.

Find all the currently published posts in this Series here.