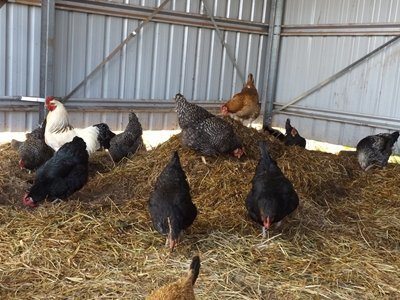 An earth-floor, deep-litter system has big benefits for the health and well-being of chickens, and it's also the easiest way I know to build an ongoing compost creation system in which most of the work is done for you.

This article shares what we've learned about deep-litter composting since we  built our new earth floor chicken shed in 2019.

In 2019 we came across a second-hand kit shed that had been sitting unused at someone's place. It gave us an opportunity to do something we had been wanting to do: build ourselves a dedicated chicken shed with an earth floor.

In "Eight Advantages of Deep Litter," Part 2 of the Beyond Eggs Series, I explained why an earth floor allows for in-place composting of the chickens' bedding and manure that's much more difficult on a concrete or wooden floor.

It's called a deep-litter system. It has big benefits for the health and well-being of the chickens, and it's also the easiest way I know to build an ongoing compost creation system in which most of the work is done for you.

This article shares some pics of our chicken-litter composting adventures since we  built the new shed, and what we've learned along the way.

Let's go over them one by one, and I'll include the things we've learned along the way. (You can click on the pictures to see them more clearly.) 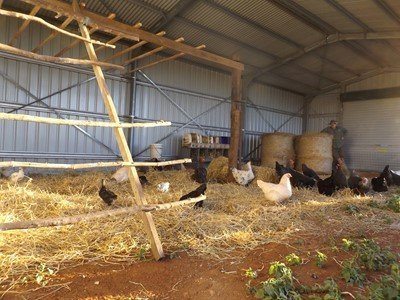 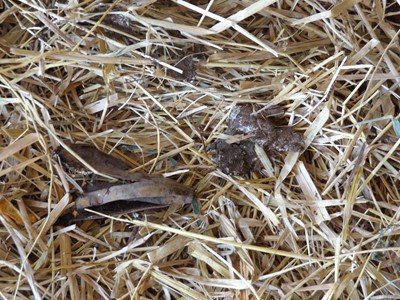 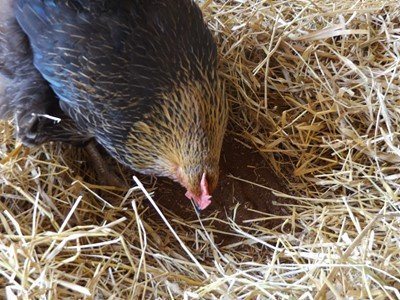 At this stage it's just hay on top of dirt; the only thing for a chicken to eat is grass seeds from the hay and the odd insect. 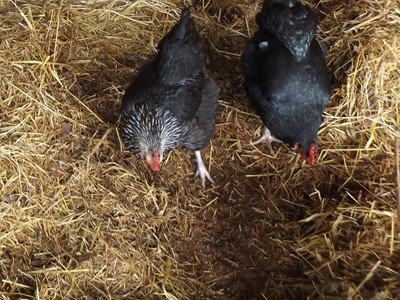 Nov'19 - the hay is breaking into smaller pieces and the soil underneath is beginning to look darker.

Step one is an earth floor, so that soil microbes can move up into the litter and bring it to life. In essence, we're mimicking what happens on a forest floor: a variety of stuff falls in layers on top of the soil, and then teeming masses of microbes convert it into more soil.

What if you have an existing wooden or concrete floor? You can still use a deep litter system and it will still greatly benefit your chickens, but:

The final section in this article describes one way to go about setting up a deep litter system on a wooden floor.

The next thing is to get the balance of carbon and nitrogen right. We're after at least 25 to 30 parts of carbon (dry, brown, absorbent materials like shavings, dry leaves, small twigs, hay/straw) to 1 part of nitrogen (in this case, chicken poop, but it could also be other fresh manures, fresh green plant material, kitchen scraps, etc).

Some carbon materials (think shredded paper or dry grass clippings) can't absorb much moisture and are apt to get slimy -- not good. Others (think large wood chips) might be difficult for the chickens to mix and stir around -- also not good. What we want is something absorbent and mixable. 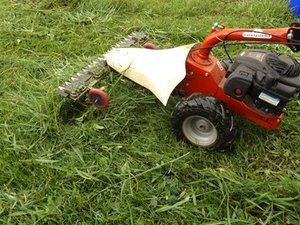 Our sickle bar mower enables us to cut long grass to make hay for topping up the litter. 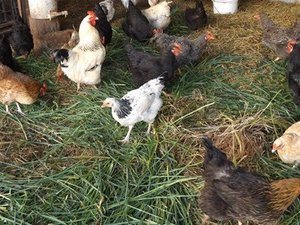 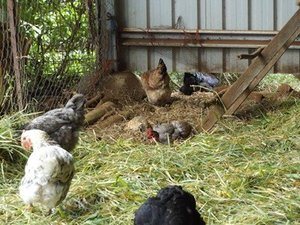 We cover the entire floor of our chicken pen with litter, but we concentrate our composting efforts under the chicken roost since that's where the most chicken poop lands.

We started out buying large round bales of mulch hay to provide the carbon for our chicken litter. Then Alain bought a sickle bar mower machine with which to cut our fast growing, coarse tropical grasses.

We've found that the freshly cut grass dries out, goes brown, and turns into perfectly adequate hay as the chickens turn it (see pics below).

When we import it, green, we spread it in the main area of the chicken shed, but not under the roost where the most chicken poop is -- that would be way too much nitrogen for that area. We wait till it's turned brown and been broken up into dry, fluffy, hay before forking it under the roosts.

I've read here and there that hay isn't a good choice because of the chance of mold spores, but for us, it has worked fine. Our current system of bringing in coarse, freshly cut grass and turning it into hay in the shed has an extra benefit: it gives the chickens a chance to go through it for insects and eat some of the leafy parts while they're still green.

Then as they continue to search through it, they break it up and fluff it up, which helps it dry out faster and probably makes it difficult for any mold to establish itself. 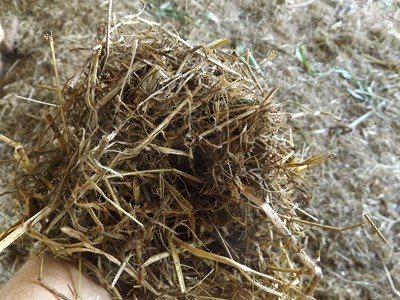 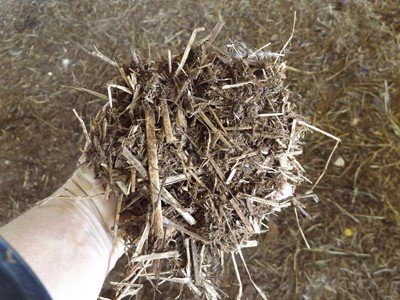 The same material after a bit more scratching and mixing by the chickens... 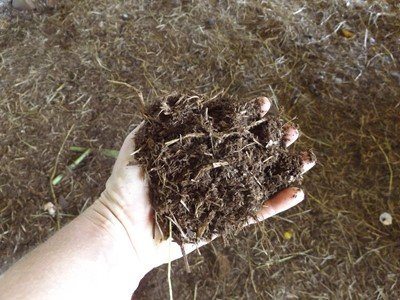 ... and still more scratching and mixing... 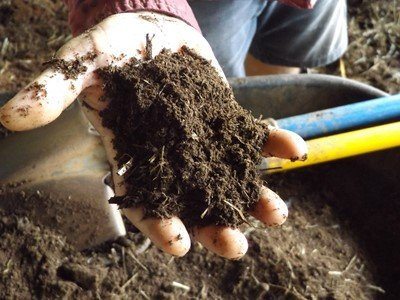 ... until it turns into done-for-us chicken litter compost.

I think its important to note that the cut grass we bring in is long and coarse, not lawnmower clippings. Lawn mower clippings might get slimy, stick together, and form a moist mat. This would be difficult for the chickens to turn and aerate, which is necessary for converting the green, moist grass into dry, brown hay.

So if you want to try using grass as your carbon source and you only have a lawn mower, you might need to be a lot more involved in helping the chickens turn and aerate the clippings until they're dry, brown, and light and fluffy, before expecting them to serve the function of a carbon source in your litter.

To recap, topping up the litter in our chicken shed goes like this:

Compost should have the moisture content of a wrung-out sponge when you squeeze it. It should stay loosely together when you open your hand, not in a soggy clump, but not crumbling apart either. (Note that in the bottom right pic, above, the compost is still a bit too dry; it crumbles apart completely in the open hand.)

In the early stages of this project we were assuming that the chicken manure would provide enough moisture, but it turned out, it didn't. And although we live in a wet climate, the earth floor for our new chicken shed was slightly raised and the surrounding area falls away from it. This seems to have been enough to keep our litter drier than ideal.

In contrast, where we lived previously (described in Parts 1 and 2 of "Beyond Eggs") the earth floor of the chicken coop regularly flooded, then drained again within a day or so. That too was a deep litter system, and it worked beautifully. I don't recommend ever flooding your chickens' home on purpose, but you do need to find a way to get the right moisture levels in there.

We solved our lack-of-moisture problem with the addition of sprinklers under the roost. 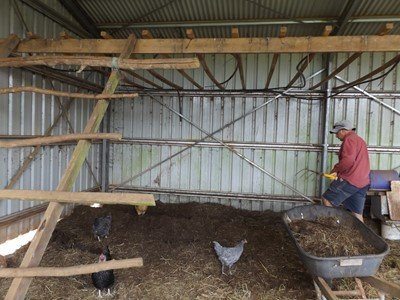 Our roosts, with black piping and upside down sprinklers tied on underneath with zip ties. (Its very hard to see the sprinklers. Sorry.)

The sprinklers sped things up noticeably. In hindsight, we should have done it right after rolling out the hay and moving the chickens in; I think we would have had finished compost a lot sooner.

Oxygen (or aeration, provided by the chickens' scratching)

We've found that when the system is working well, the amount of time we need to spend in there with a pitchfork is minimal.

BUT, you will have to get in there and turn the litter yourself if for some reason the chickens aren't managing to get the job done. Unless the litter is turned and aerated consistently, the beneficial, oxygen-loving microbes will die back and all you'll have is a stinky mess full of anaerobic bacteria that are not at all health-promoting.

If you're having to wield the pitchfork too often, ask yourself, "Is there enough carbon? Is the carbon easy enough to mix? Is there too much moisture?"

Healthy compost is irresistible to chickens. If they're not scratching away at it diligently all day long, they're telling you something's wrong with it.

Harvesting the compost and never again cleaning out the hen-house

Harvesting the compost is the best bit. It's simply a case of scraping aside the top layers of the litter until you get down to fully composted, dark, rich, friable, sweet smelling stuff that looks like it has come from the floor of an old growth forest. Magic.

If you have terrible memories of being the one who had to clean out the chicken coop when you were a child, take heart. Done right, a deep litter system is forever. You're in charge of keeping the 5 ingredients in balance, but you can leave the cleaning to the microbes, just as nature does on a forest floor.

Now, that makes me wonder if I could invent a deep litter system for the floor of our house...?

My all-time favorite chicken resource is The Small-Scale Poultry Flock by Harvey Ussery. You can find his chapter on deep litter in the hen house, here.

And if you live somewhere that gets proper winters, this is a great read too -- scroll to the end of it for his use of hay as deep litter during the winter.

Finally, here's an article about moisture levels in compost.

Please share your own composting set-up, or questions and other thoughts, in the comments -- thank you!