This post shares lots of pics and a few tips on growing and harvesting ginger, and making ginger honey to settle coughs and for colds, flu, and general immune support. There are also some pics and tips on arrowroot harvesting and replanting, since we sometimes grow these two plants together.

It's late winter here in the Southern Hemisphere. That means there's lots to do in our subtropical food garden to get things into the ground that benefit from a long warm growing season.

The row that we harvested ginger (Zingiber officinale) from while I was taking pics for this post also had arrowroot in it, as a companion plant to the ginger. So this post starts off with some arrowroot pics and commentary, and then we'll get to the ginger part.

In the image below, Alain is harvesting ginger and arrowroot from a row we planted last October (we were very late). He's putting the ginger in the white bucket, and piling the arrowroot off to the side. 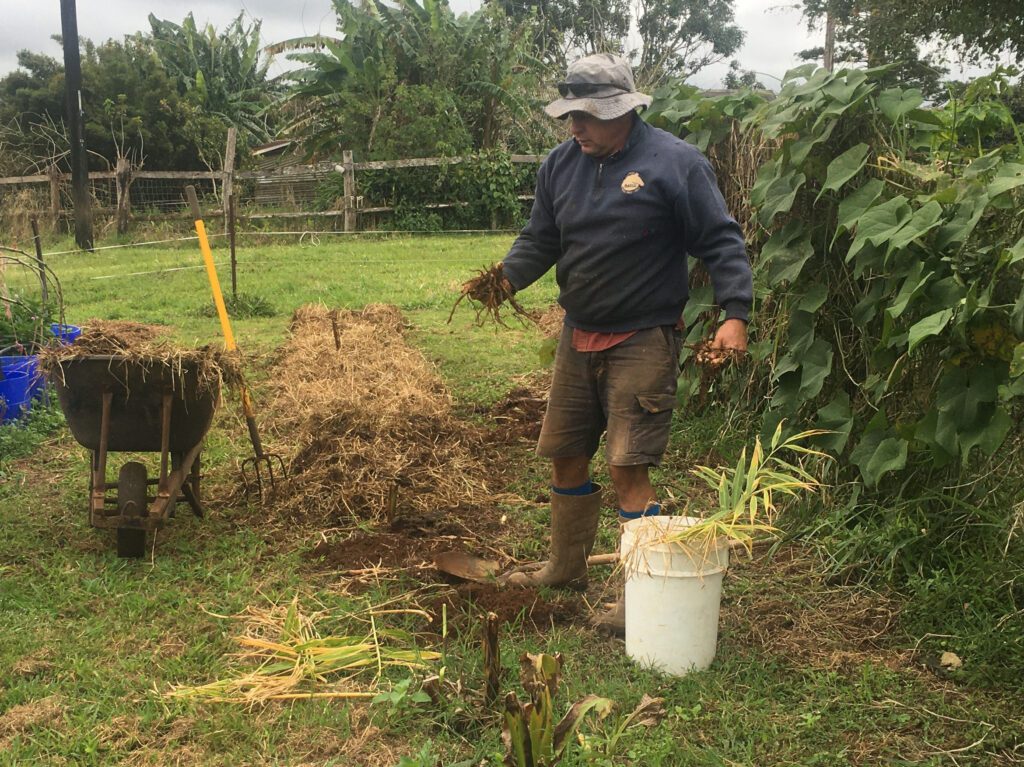 Here's the pile of arrowroot... Most of it is old and only fit for the pigs, since not much happens with arrowroot through the winter. 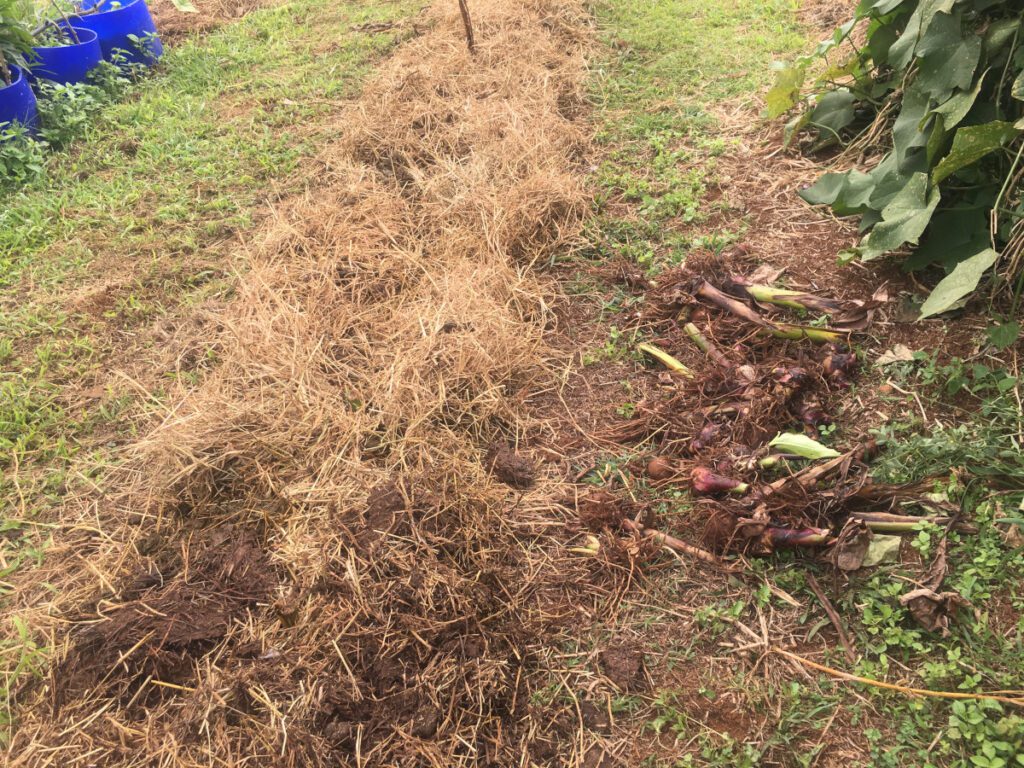 But some of the rhizomes in the pile have woken up to the lengthening days, and they look like this (below),  which is perfect for replanting. In the images above, Alain has been replanting arrowroot rhizomes like this behind him as he goes. (This will be an arrowroot only row now; we'll use the ginger in the bucket in the kitchen and for replanting elsewhere.) Pros and cons of growing ginger with arrowroot

We planted this row last October, well into the hot weather, and we interspersed arrowroot and ginger so that the arrowroot would shade and protect the ginger.

The pic below with the ginger circled in red was taken last December, only about two months after the row was planted. (This post that you're reading right now was written in July 2022.)

As you can see, the arrowroot took off like crazy in the hot weather. I can't recall if it was wet, but I do remember that Alain watered it a few times -- so it must have had enough moisture. 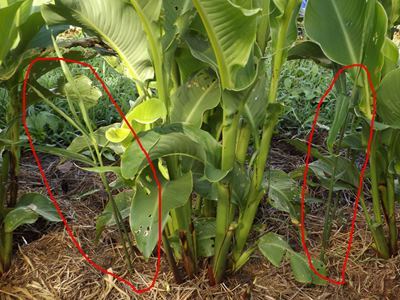 Our ginger and arrowroot planting experiment had some pros: the ginger did quite well, even though it was crowded and received zero maintenance. The harvest was relatively abundant given those conditions (see pics below).

So that probably means one or both of two things:

1, Maybe the ginger liked the thick  layer of cow shed bedding that we initially put down for the row. This was mulch hay with cow manure, horse manure, and plenty of cow and horse urine in it. It wasn't mixed or composted beforehand, just dumped thickly on the ground as you see in the two top pics above. Then we make a hole in the middle of the mulch, dig into the soil below, plant whatever we're planting, and pull the mulch together around it. The mulch is thick, wet, and sometimes sloppy, and it seems to suppress the grass adequately. We do one big dumping of it when we first plant, and an occasional top up along the sides of the row during the growing season... but we're not very diligent with the top-ups. It's a bit haphazard.

2, Maybe the ginger also liked the shelter and micro-climate provided by the faster-growing arrowroot.

Another pro was that we harvested arrowroot stems as chicken fodder, and rhizomes for the pigs, frequently through the growing season and the ginger kept chugging along in spite of that disturbance.

The only downside was that harvesting arrowroot rhizomes was a bit trickier since we had to try not to damage the slower growing ginger rhizomes. That's the main reason why we won't be repeating this planting arrangement this year.

Since we planted it so late and crowded it so tightly, we thought there wouldn't be much of a ginger harvest. (If we did it again, we'd space it out a bit more; I think we forgot how vigorous arrowroot can be.) So we were pleasantly surprised: 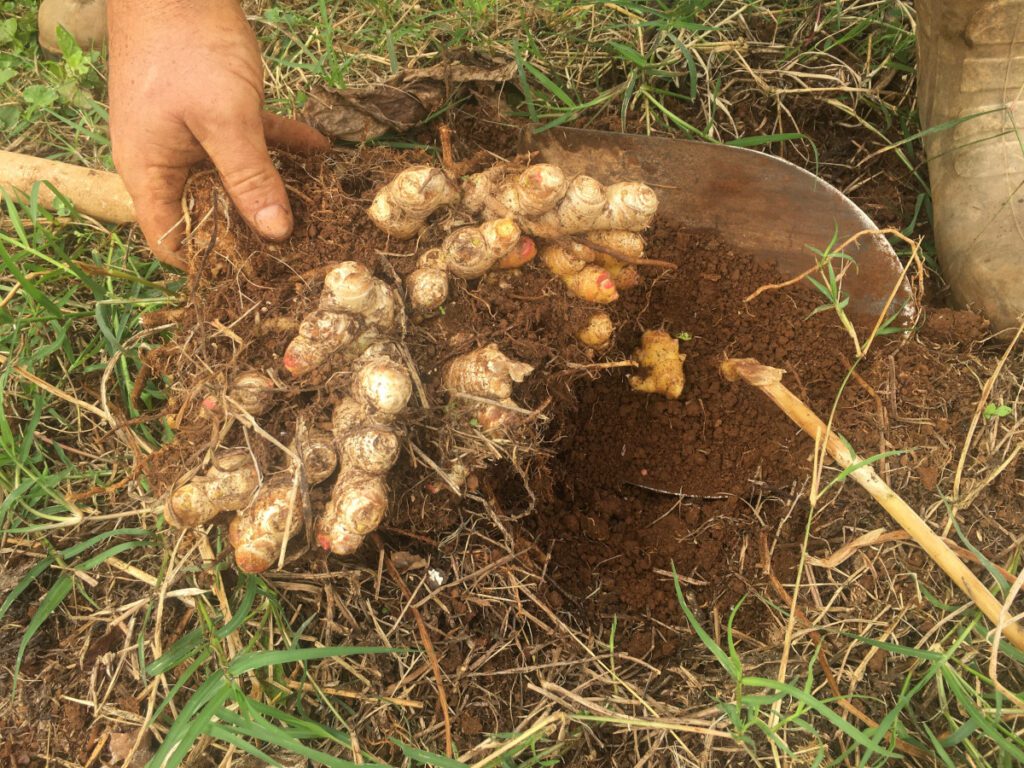 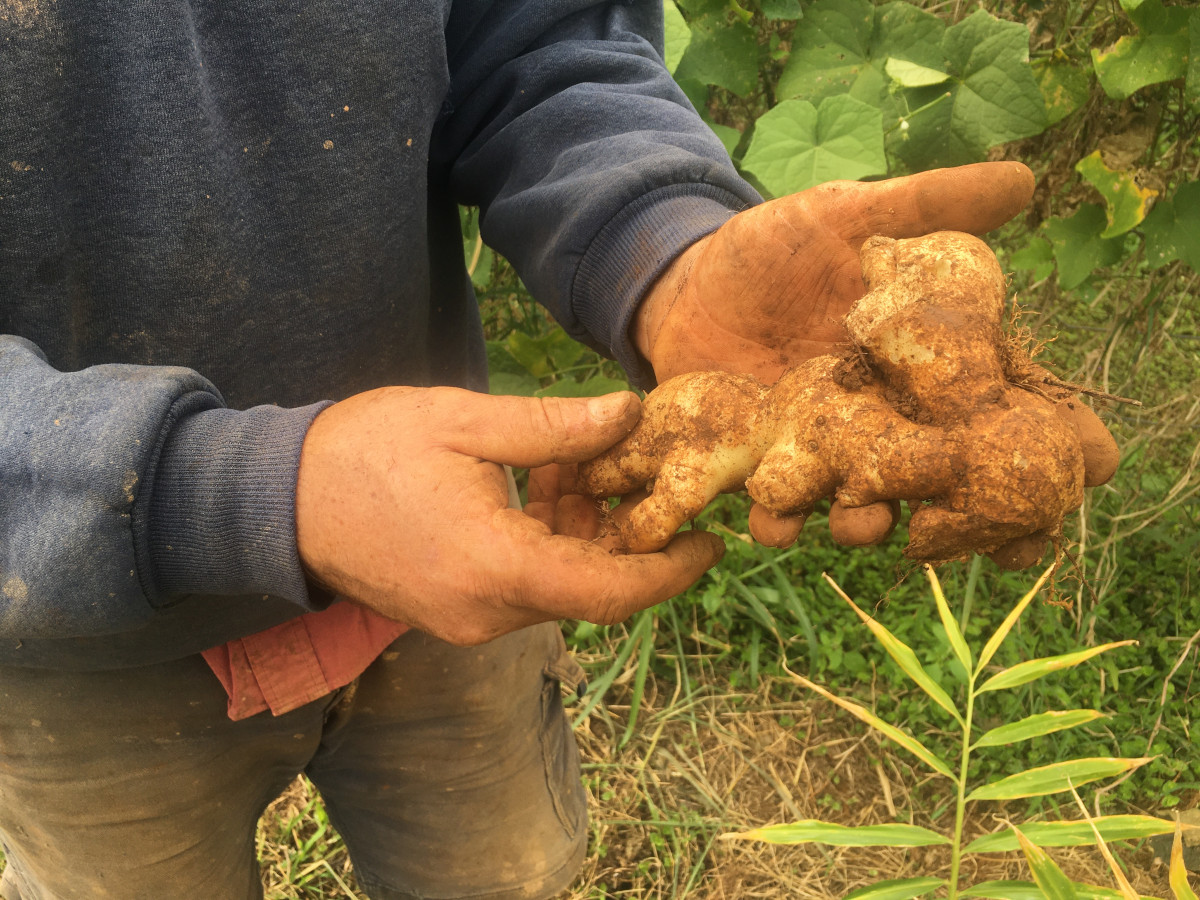 My favorite way to preserve ginger is to leave it in the ground and only dig up what we need, when we need it. That works for us because:

We do dig up whole clumps (or in this case, whole rows) when we want to subdivide and plant more, or plant in a different place -- and when that happens, it's a good time to make ginger honey.

Check out this post for more ginger preserving tips1 for if you can't store it in the ground. Scroll down to the heading that says "Preserving ginger."

I've been moving "make ginger and garlic honey" forward in my diary to-do section for a while, and yesterday Ella had a sore throat -- so I dosed her with these medicinal honeys and then got on with this important medicine cabinet task. 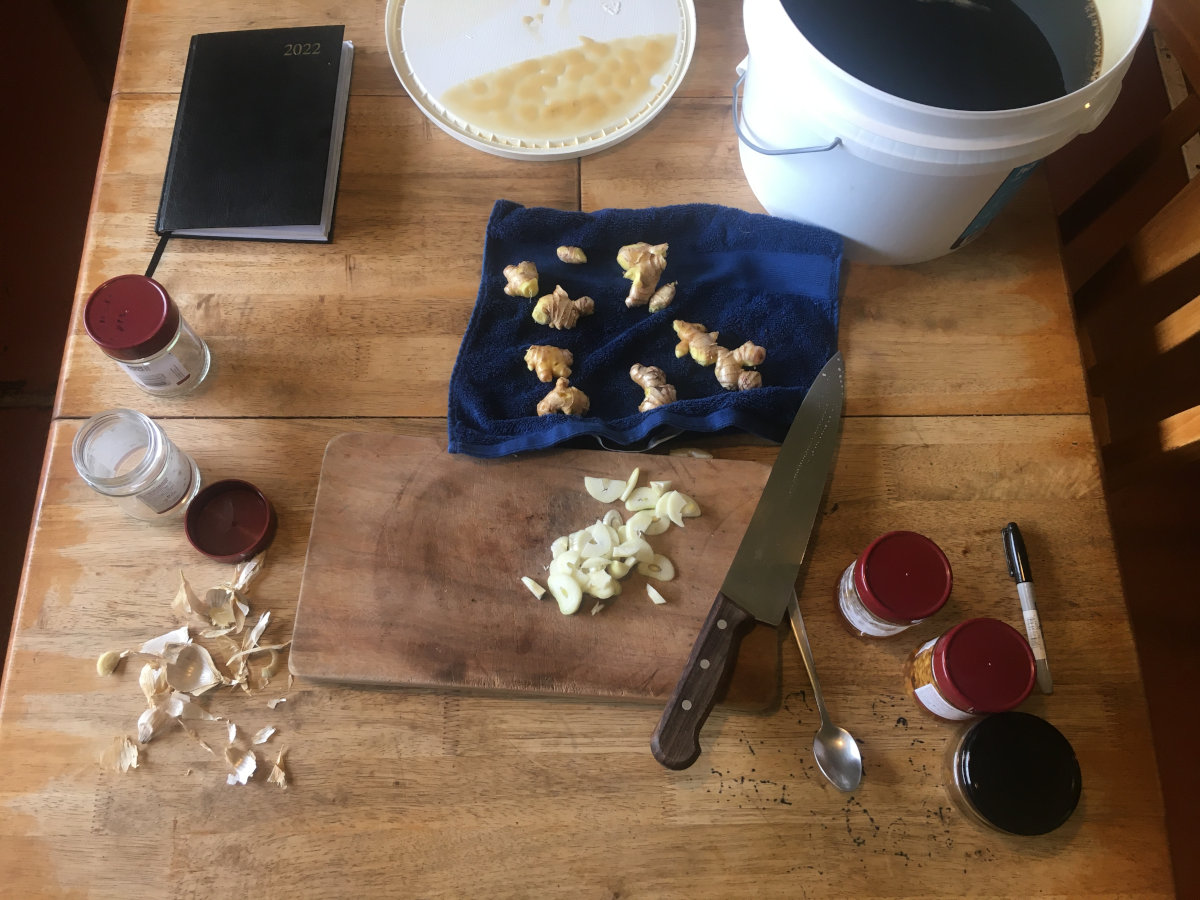 (Yes, we really do buy raw, unfiltered local honey by the bucket. It's a bit cheaper and it saves a lot of packaging. Honey keeps for a very very long time, which is one of many reasons it's great for preserving things like ginger).

The other ingredient you see on the table in the pic above, besides honey and ginger, is garlic.

All sorts of medicinal and nutritious herbs can be preserved in honey, and the honey adds its own medicine and nourishment to the mix. My favorites are ginger, garlic, and turmeric. (I'll make turmeric honey another day, and when I do, I'll link to that post from here.)

"Honey has [been] used for a wide range of diseases. ... Studies have validated many of these uses, especially in regards to respiratory illness respiratory illnesses (including sore throats and coughs), eye disease, and wounds and burns. ..., eye disease, and wounds and burns. ...
Honey is hydrophilic, which means it draws water from the plants. When fresh herbs are infused into honey, it creates a syrupy mixture, thinner than honey itself, that’s alive with the taste and benefits of the herbs you used..” 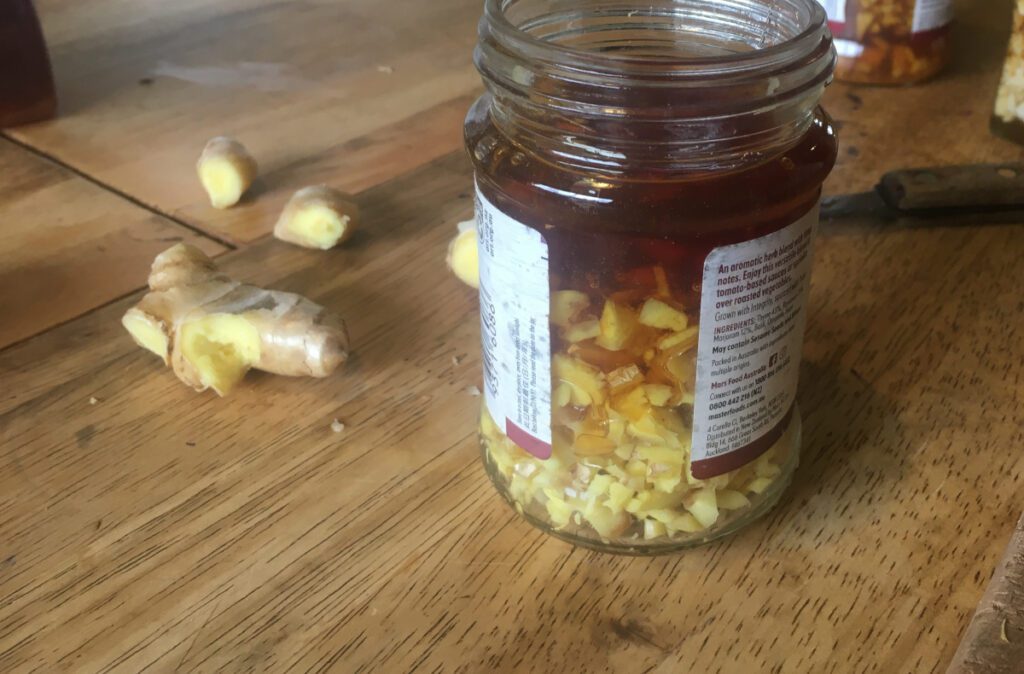 Ginger honey, or any herbal honey, is easy to make. Chop the honey, garlic, or whatever you're using, put it in a clean jar and pour raw honey over it. (If your honey is cold and thick, consider warming it gently to make it run easier.)

To peel or not to peel? I peel my garlic cloves, obviously, but I don't bother peeling the ginger. I just give it a good scrub first under running water then let it air dry before chopping (that's why it's sitting on a towel in the pic above).

After you've chopped and poured, poke about with a knife or something to release the air bubbles and mix things up a bit. 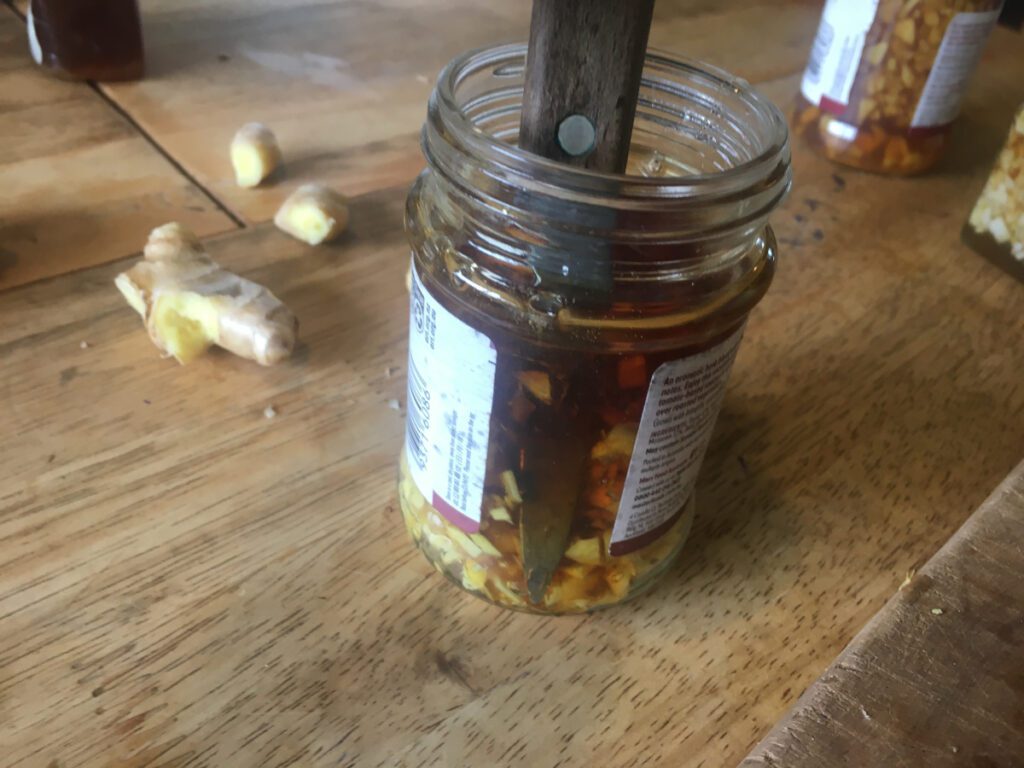 Label it clearly. Put it on a shelf out of direct sunlight and leave it for as long as you can stand.

It depends how long until someone gets unwell and needs it, or someone gets curious and wants to try some and then can't help but eat more... But to try to be a bit more specific, here are some things to consider: I appreciate hearing your thoughts, and I read and respond to every comment 🙂

new posts to your inbox?

after clicking subscribe, sit tight for a confirmation message